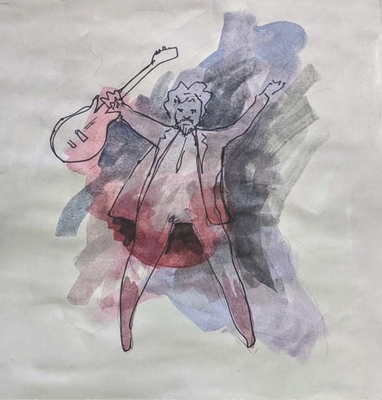 Prolific Canadian troubadour Eamon McGrath has released his most exploratory, reverential, and optimistic LP, Bells of Hope, on Saved By Vinyl. Channeling the sadness and uncertainty of our times into musical expressions of beauty and hope, McGrath moves in an even prettier, ambient direction, incorporating sonic influences as diverse as Talk Talk, Brian Eno, and Alice Coltrane into his familiar palette of rock and country-laden Canadiana. The Bells of Hope tour will kick off tonight in Toronto, with dates across Canada and Europe. Full routing is available below.

“The album title references not only a conscious effort to realize a more optimistic and positive-sounding album than its predecessors, but also a long-standing tradition where after a cancer patient has finished their treatment they ring a bell in the hospital,” explains McGrath. “This last year not only saw the world come to a halt because of the tragedies of COVID-19, but it came in tandem with what was an already difficult period for myself and many others. This album is a chance for me to ring one of those figurative bells, looking forward with promise. Things can always and will get better, and it’s important to never lose sight of that.”

McGrath shines a light on some of his most treasured relationships built from a decade spent on the road. Some of Canada’s most glowing talents collaborated with McGrath on Bells of Hope, including Julie Doiron, Miesha Louie, and Joyful Joyful’s Cormac Culkeen. In this digital world, Eamon McGrath represents the most analog form of artistry. Within his ‘never-ending’ tour, McGrath has also created a record meant to be heard front to back in one setting: a classic album in a world of disposable singles.

“Age of Unease” explores the drastic and emotional political, cultural, and social changes of the 21st century and documents the individual lives of the people who’ve borne witness to them. Through lush strings, melancholic melodies, and a groove (provided by July Talk’s longtime drum-basher Danny Miles) deep enough to find a home on any dancefloor worldwide, “Age of Unease” represents for its author a new beginning and a rising sun. The video, by Edmonton-based filmmaker Dylan Rhys Howard, is an impressionistic glimpse into the lives of two lovers as they navigate a tumultuous, unpredictable and chaotic world, with only each other to depend on as a guiding light in these dark and murky times.

Of the singles, “Sparkle and Bleed” was written at the onset of the pandemic, as the trademark energy and beauty of Toronto was replaced overnight with a feeling of desolation and desperation. “Cannonball” finds McGrath reflecting on his first break from the road since 2016, with “Sarajevo” expressing frustration about the Western sentiment towards lockdowns and public health measures. As we approach a warmer season, “April” conjures the melancholic and longing nature of the thaw of spring.

In these trying times, we could all use a little hope. Continuing on a path first forged by 2018’s critically acclaimed Tantramar album and even more lauded follow-up Guts in 2019, Eamon McGrath unveils Bells of Hope, the third in a trilogy of releases defined by an ever-evolving and maturing sound by the road-hardened, working-class Canadian musician. Tantramar and Guts saw McGrath move away from the trademark bombastic and savage rock and roll of his early years into a new era of growth, celebrating and embracing new sounds, atmospheres, and textures. Moving past the tarnished and primal Neil Young-meets-Black Flag approach of his early twenties, Tantramar and Guts saw McGrath channel inner darknesses, turning somber and harsh experiences into moments of beautiful noise. While not only shedding the guitar-forward technique which characterized the McGrath of the late 2000s and 2010s but also the doom and gloom of his last two albums, this new decade brings to light an artist who leaves no sound unexplored and no idea off-limits.