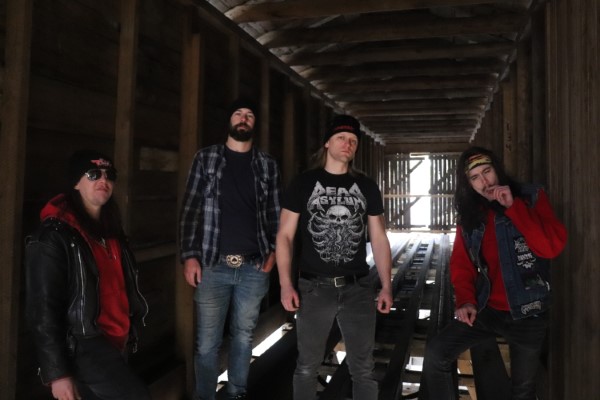 Halifax, NS-based band Turbo released their album, Fast As Fvck back in July of 2020, which featured seven tracks.

“Fast as Fvck is a sort of homage to true rock and roll in its most vicious and visceral form. Each of the seven tracks hit like a swift kick to the teeth from a whole new angle of attack, but the assault is far from a mindless battering to the eardrums. The album ebbs and flows through different moods and subtleties with sophisticated craftsmanship. Metal enough for the heshers, punk enough for the threshers, and rocking enough to satiate the haughtiest of purests; we in Turbo have patented our own “Nitro-Rock” concoction with our debut album… and this shit is potent.”

The newest single, “Alive” was released with an accompanying music video by John Roy, which you can check out below.

The band shares on “Alive”,

“Alive, which is more or less a written testament to bad-decisions with one of the most badass riffs on the album slapped on top of it. The song features a call-and-response guitar harmony and an anthemic chorus. There’s not too much more to say on it apart from being among the most fun songs on the album; definitely one to do a kegstand along to.”

Find out more about Turbo via our Five Questions With segment.

Our most recent album “Fast as Fvck” is a gateway drug to the rock-and-roll lifestyle. We call ourselves “Nitro Rock”, and it falls somewhere between the ven-diagram of metal, punk, and hard rock. It hits hard and is vicious as hell. Give it a try if you’re into W.A.S.P., Motorhead, Guns n’ Roses, and anything that sounds like the vocalist is turning his voice into sand!

We keep ourselves in the public eye via social media, which none of us are particularly good at, but we’re trying. We also host audiences at our rehearsals and have a healthy merch presence on our Bandcamp, which helps keep the flame alive.

We’d love to work with any members of Kill Cheerleader. They’re not a band anymore, but their sound among many others has shaped our sound in a very profound way, and they seem like they’d be fun guys to party with. Honorable mentions go to Cancer Bats and Skull Fist – old friends of ours who we’d love to share the stage within this band.

We’re planning a couple of tours around Canada’s East Side with our buddies in Deadwolff. We’re also halfway done with our second album, “Ruthless Forever”. All of which we’re really excited about. Find us on Facebook, Instagram, YouTube, and Bandcamp for more info and releases!