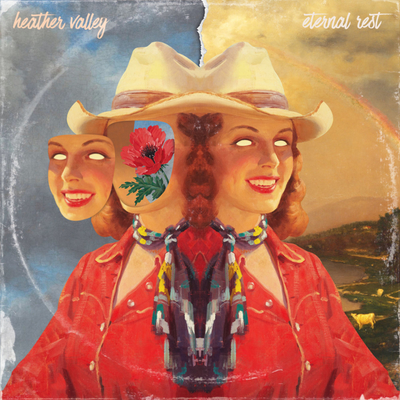 Art by Josh Dunlap aka @chemicalmessiah

The EP was recorded at home in isolation at a lonely farmhouse in southwestern Ontario and features performances by Thomas
McKay (Joydrop) on wurlitzer, Nimal Agalawatte (Basement Revolver) on bass, Gareth Inkster (Walk Off the Earth) on violin, Mike Brenner (Magnolia Electric Co, Wild Pink, Marah) on steel, and Heather Valley on guitars and vocals. It was mixed and mastered by Nimal Agalawatte at Four String Audio in Hamilton.

Check out the 3-track release below, and find out more about Heather via our mini-interview.

You have just released your EP, Eternal Rest. What can you tell us about this collection of songs?

These songs explore the honest things in life: how isolation and solitude intersect with peace and truthfulness, how people only understand one another via their own experience, especially in the dark territory of trauma and recovery, and how we live cycles, just like the seasons on a farm.

Through Fog (4:52) places you in the kitchen of an old lonely farmhouse. Even the barn milk house is obscured by the morning fog. The passage of time from childhood to adulthood is weak here. The narrator goes back and forth, lost in the big cabin of the truck of her childhood memories, and the big confusion of the people who have since hurt her, receding into the safety of brewing coffee and setting out her laundry, holding on to the small comforts of this solitude even after the fog burns off.

Great Violence (4:18) explores the idea that someone can only understand your trauma, and by extension, you, If they have experienced something close to it themselves. This is both isolating and unifying, depending on who you are talking to. (Single released Nov 6 in support of HV’s performance at TakeRoot Festival in Groningen, Netherlands).

And Jim Hanlon (6:05) explores a family history through the stories of men who shared the same name, bringing the listener from Ireland to Canada, from Ontario to the prairies, to churches and quarries and lush gardens, charismatic men with flowers and spying children who want to know what the adults are doing, adding to the history of the place, and perpetually wondering what secrets the adults can’t or won’t share.

In short, this EP is an ode to the empty farm where it was recorded and the many lives that have passed through it over nearly 200 years.

The EP was recorded on an empty farm, what made you choose this location?

I didn’t exactly set out to record these songs at this farm – I was living there and they happened. Art the beginning of the pandemic I was in the mountains of West Virginia on a writing retreat. When the borders were closed, I drove back home and had to quarantine for two weeks. My friend and his sister had inherited their family farm in southwestern Ontario and they offered for me to stay there because it was unoccupied. Those two weeks turned into four months of a great deal of solitude. I would wake up every morning and write or play, make a big breakfast, then walk the 200-acre property and the mile-long concessions for hours in the afternoon discovering bones, special places, and watching the seasons change more slowly than I had ever seen before. In the midst of this protracted period of isolation, I found myself exploring some emotional territory that I had not had time for beforehand, and these songs came out.

You’re scheduled to perform at Hamilton Winterfest on March 5, and March 25 for Eamon McGrath’s album release, how does it feel to return to performing after such a long period of time during the pandemic?

I was very fortunate to be able to perform throughout the pandemic, as a part of some really lovely livestream opportunities sponsored by the city of Hamilton, local BIAs, and venues.

I’ve also played live shows when it’s been allowed, including a five-country European tour this past fall, anchored by a performance at TakeRoot Festival in Groningen, Netherlands.

What feels different about these upcoming shows is that it feels like the start and stop of the last two years is almost through. I am very hopeful that these shows are the start of a consistent return to live music.
And what feels really special about them is that I have a brand new, absolutely killer band which has filled out my sound. Where historically my solo shows have been meditative and thoughtful, the band sound features beautiful harmonies, and it’s fun, celebratory, danceable and we really rock out!

This year I will be completing the sophomore studio record I’ve been recording with Aaron Goldstein in Toronto. It will showcase that big full band sound I just mentioned and I’m really excited to share the new band sound with the world. However, I will keep recording little collections like this, which reflect my inner world in quiet moments as well.