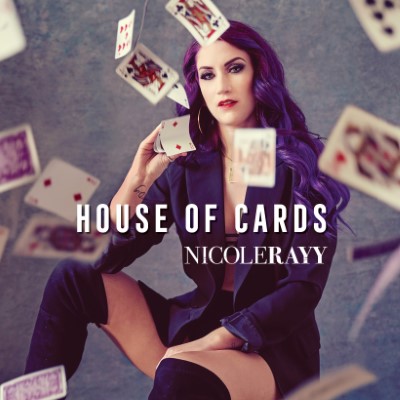 The Canadian country-rock music powerhouse Nicole Rayy has just gotten even more powerful with the release of her latest video for “House of Cards” on February 17. The single was released everywhere on January 21.

With each passing single and video, Rayy seems to be headed to new heights in her career and she is on fire with this one – I can’t get enough of “House of Cards.” Rayy, along with Damon Ironstone, are super stars with a very cool vibe in this music video. It’s sensuous, dangerous, and loaded with passion.

Rayy shares this about it,

“This video is different from anything I’ve done before. I really wanted it to showcase the passion and danger of the relationship that is discussed in “House of Cards.” This is the first time I have put this type of heat into a music video. AJ Astle from Roadhouse Productions did an amazing job bringing my vision to life. Especially the way he captured lighting an actual house of cards on fire!”

Rapidly growing her name in the country industry with over 28.3K social followers and 25K TikTok likes, Nicole Rayy has amassed over a million catalogue streams to date, with her smash 2020 single “Broken Boys” racking in over 500K streams alone. Four-time CMAO nominee, she is finding her music places across popular playlists like Spotify’s New Music Nashville and Live Country, as well as Amazon Music’s Breakthrough Country and Certified Country.