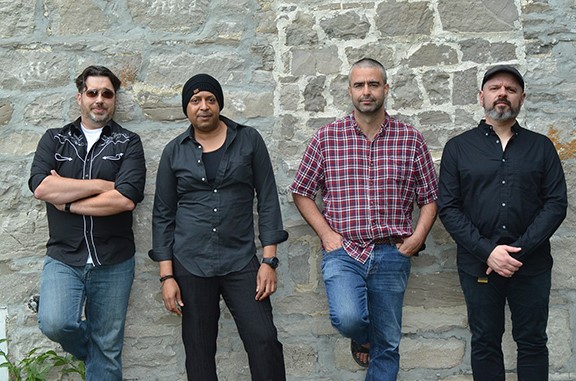 A warm blend of rich, full-bodied acoustic guitar, wailing electric guitar, and easy beats, “Angry Young Man” tells the first-person narrative about a confused young man in conflict with the people he loves, even though he knows it isn’t deserved.

The chorus kicks in and that’s when the narrator admits in honeyed, soaring melody, “Well, I’m an angry young man/Fighting for something I can’t understand.” The inspiration for the song sprung from Greek philosophy, of all places – though it’s not all that surprising when you consider how the Greeks had a word to identify every nuance of emotion.

“I remember taking this course on ancient Greek philosophy,” frontman Rod Leggett says, “and the teacher was going on about thumos.”

Thumos is an old word for the concept of “spiritedness.” “At its worst, it’s rage — like the rage of Achilles,” Leggett continues. “At its best, it becomes courage.”

At one point, Leggett’s teacher told the class that young men are especially prone to thumos.

“That stuck with me,” Leggett recalls. “He’s right, I mean, young men really are prone to being angry.”

Not long after HemlockHotel recorded the song, Leggett knew the band was on the right track as he was listening to another song by another band, “(Nothing But) Flowers” by Talking Heads. Leggett heard the opening lyrics  — “‘Years ago, I was an angry young man/And I’d pretend/That I was a billboard/Standing tall” — and smiled. “I thought, ok, David Byrne gets it. I’m good with that,” he says. “You know, I really look up to that guy.”

Check out “Angry Young Man” below, and find out more about HemlockHotel via our mini-interview.

We’re a four-piece band located in Ottawa. We met about three years ago and started gigging in and around the city. First, we played cover songs by bands we had a common appreciation for, bands like Blue Rodeo, The Tragically Hip, the Eagles and other bands that roughly fall in the Americana genre. Slowly we started inserting originals into our set. Now the tables have turned, we play mostly originals with a few covers. We recorded a 7-song album in late 2020 and recently, we headed back to the studio (with our friend Steve Foley at Audio Valley) to record a couple of singles. “Angry Young Man” was released in February, and we will be releasing a second song later this spring.

What did you learn from in the course on ancient Greek philosophy that you still use today?

Ancient Athens was a unique period in history where immense advances were made in science and philosophy. However, we have to remember that its economy was in part premised on slavery. The Renaissance painter, Raphael, captured the myriad of thinkers who were advancing all kinds of ideas but Aristotle and Plato were certainly at the center of it all. At least, that’s what we have inherited. The idea that philosophy was a “way of life” (not just disembodied abstract thinking) is what we take from the ancients. You have to live and breathe what you do and find a connection between the ideas you have and the way you inhabit your relationships, with self and others. Plato was also an erotic thinker, which means that he was trying to nourish his soul with the eternal dimensions of life. We are born feeling empty and philosophy should help us find the right kind of soul food. Music is certainly soul food.

Tell us about the making of “Angry Young Man”. What started the idea?

Like a lot of songs, it started by noodling on an acoustic guitar. The riff, I always thought, had a Neil Young-like feel to it. Kind of like “Unknown Legend” but less atmospheric and with a lot more grit. Maybe the grittiness awakened that combative part of the soul and so punchy and pithy vocals ensued. The way the drums punch their way into the intro really spanks to the mood. At first, the song was a little slower but as the band worked it, it took on a rhythm that you can dance to.

What still gets you angry?

I try to get angry about the right things. In our prissy pursuit to be perfect beings (you know, the illusion of complete control and being on top of everything), we tend to ignore the good in anger. It can propel us to do noble things (Martin Luther King Jr.), but it is a dangerous force that can destroy and pulverize lives and nations. Courage requires grit and single-mindedness, but rage can burn-up something irrecoverably. On an everyday level, what can irk me is the way too many of us essentially dehumanize one another. It’s on full display in our politics that are incredibly polarized. Maybe there’s too much noise today and we have lost the capacity to listen and use our ears. I had a friend, a music teacher, who would always tell me to grow bigger ears. This might apply to politics and relationships too.