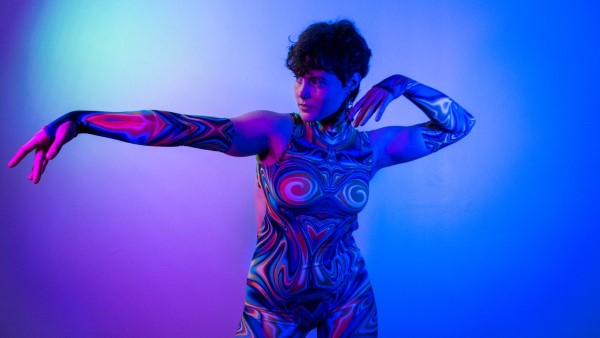 Toronto, ON-based queer experimental synth-pop artist, MOONBEAN is a character that Valentina Morelli came up with over the pandemic. MOONBEAN has unveiled her debut single, “Worlds Collide”.

The single, “Worlds Collide”, reigns in disco, techno, electro-punk, and pop vibes with layers upon layers of textural synths, bumping percussion, and lush, lo-fi vocals. Worlds Collide is a tune you’ll definitely want to add to your dance playlist this year.

MOONBEAN’s debut album, MOONTUNES is set to be released on June 2, 2022, and she will be touring the album in Europe this fall.

Check out “Worlds Collide” below, and find out more about MOONBEAN via our Five Questions With segment.

I’m Valentina Morelli, a queer, Toronto-based solo artist. I perform live with my co-producer under my artist name, MOONBEAN, as an electronic duo. We sport cosmically confused costumes while performing a hardware synth set with lush vocal melodies and super dancey rhythms. We dabble in experimental synth-pop with flavours of psychedelia, acid-house, and techno.

Pre-pandemic I had been composing and performing as a singer-songwriter with a 12 piece band but when the world shut down I started exploring electronic music and challenged myself to write a song a day. Some gems floated to the surface and developed into what has become MOONBEAN’s debut album MOONTUNES which is set to be released in June 2022.

The character MOONBEAN was born out of pandemic times as a way to explore writing with a different persona. MOONBEAN is an androgynous creature from the oceans of Jupiter’s moon Europa who traveled to earth to spread sexy messages of empowerment and love. The music pulls inspiration from artists like Little Dragon, Peaches, Metric, and Eurythmics.

Worlds Collide is a fast-paced electro-punk tune that lyrically explores the chemistry between two beings who are on very different planes yet still drawn to each other. Pulled from real-life experiences of a long and late night at a summer music festival, the lyrics practically wrote themselves.

I had a lot of fun creating the sounds for Worlds Collide. I ended up recording 20 different versions of the bassline with different synthesizers and textures to find a combination that hit all the spots I was aiming for. It started out as a fairly simple demo but it unfolded into a much more sonically complex creation with many hidden ornaments for listeners to discover.

Though I wrote and produced the song, I was super lucky to have my co-producer with me for every step of the recording and mixing process to bounce ideas off each other. The song was then polished by Oakfield Mastering Studio in Germany.

To compensate for live ‘in-person’ shows, I’ve hosted a few online events including a fundraiser for breast cancer where we put on a 2-hour show with fellow Toronto artists, Britney Jones, Ollie Del Mastro, and Red Rhythm & Blues and raised $1500 for the cause.
I also update my online presence weekly whether it’s a cheeky selfie or a clip from a rehearsal, I’m also a dancer and sometimes post clips from those practices as well.

I had a show booked for this past January but it was canceled due to the lockdown, so in lieu of that, I put on a little virtual show to celebrate the release of my new single ‘Worlds Collide’ which was also released that day.

While I have enjoyed navigating the virtual experience as a musician I certainly am looking forward to getting back to live performances!

The first artist that comes to mind is Peaches! As mentioned above, she is a huge inspiration of mine and you can hear the influence of her music in many of my other favorite musicians as well. Peaches is such a fierce, innovative and unapologetic artist. Her presence as an overtly queer and sexual artist has had a truly inspiring and positive impact on me as an emerging queer artist. It would be an absolute blast to work with her.

One major goal is to tour with the new album MOONTUNES (which will be released June 2022) around Canada in the Summer and then off to Europe to tour in the Fall. Another goal is to release a few music videos to complement the album’s release.

Although there is such uncertainty in our current world (and always for that matter) it is important for me to move forward with my eyes open and plan for the best. If the world has different plans for us then I shall take it as an opportunity to pivot and make the best of the situation.