Rising Canadian country artist Karli June has released her debut EP, Where You Come From 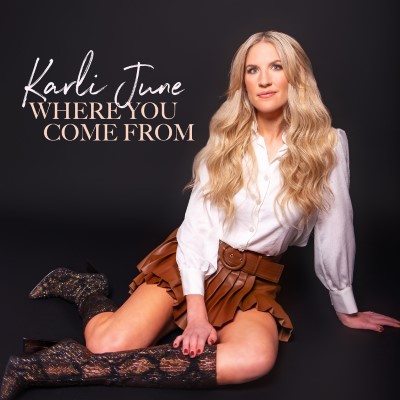 Ontario’s own Karli June has a pop-flavoured approach to songwriting that’s both optimistic and thoughtful and you can hear that in her debut EP Where You Come From. Aptly named, the EP displays June’s own background, her life, and the choices she’s made in a way that’s as relatable as it is inspirational. This EP, released February 18 via Orchid, is a major career step for June.

The EP’s six tracks include the singles “Heart Drunk,” co-written by GRAMMY-nominated, CCMA, SOCAN Award-winning, and JUNO nominated songwriter Deric Ruttan, “Home Team” (co-written with Karen Kosowski and Tori Tullier), and “The List” (co-written with (Kosowski and Emma-Lee Ashlee) are the tracks that have started to put June on the map over the past year and a half.

Where You Come From was produced by award-winning, Canadian powerhouse Karen Kosovska who most notably produced the majority of the GRAMMY-nominated Mickey Guyton album Remember Her Name and is also well known for her work with Brett Kissel, Madeline Merlo, and The Washboard Union.

June’s plans for 2020, like so many other artists, were put on hold but that didn’t stop her from moving forward with her music. With the adversity and frustration that 2020 brought came opportunity and that’s where she found her inspiration. That especially shines through on “Home Team” and “Big For a Small Town,” both of which find June celebrating how people in our lives often help reveal our myriad blessings even when life doesn’t play out exactly as planned.

June explains,
“My goal is to make people feel like they’re strong when they listen to my music, but in a way, that’s energetic and fun. I love music that makes me feel like I want just give life everything I have. And I want to make others feel that way as well.”

June displays her powerful vocals, her knack for seamlessly blending modern country and good time rock and roll, and her core message about the importance of loving yourself in good times and bad in equal measure in her new single “Makes You Pretty.”

Says June about this track,

“I wanted to write a song about truly where a woman’s beauty comes from. So, it’s about how feeling weakness, being vulnerable, but overcoming obstacles is truly what makes a woman beautiful. Put simply, it’s a blunt, uncompromising tune that puts the boots to the lie that a woman or girl’s value lies in how others perceive them and illuminates the truth that what truly counts is how you see yourself – something that’s reflected in the eyes of those who love you, not those who seek to tear you down or make you conform to their narrow conception of beauty.”

Karli June was named one of three finalists to represent Ontario in the nationwide Jim Beam Talent Search, as well as be one of 20 artists chosen from thousands to participate in the 2021 TD Incubator for Creative Entrepreneurship powered by SOCAN Foundation.