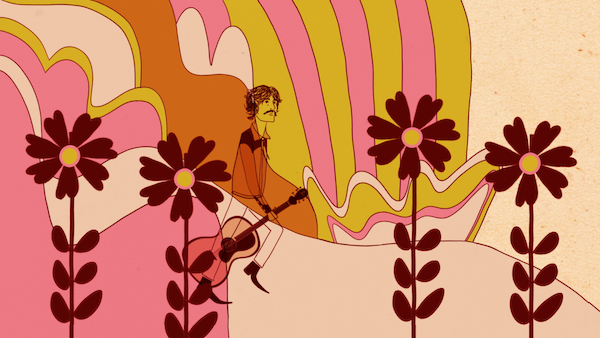 Just about a month from now, Jerry Leger will be releasing his new album, Nothing Pressing, courtesy of Latent Recordings. You can pre-save the LP here. Last Wednesday, the celebrated songwriter shared another new track from the album, “Underground Blues”, which Leger says is about ‘survival’. He explained:

“When asked about what success meant to him, Leonard Cohen replied ‘survival. He was reflecting on when he wrote poetry books and novels that barely sold a few hundred copies each, then started making records that had sluggish sales before seeing his career become more financially successful. This was a guy who had one of his albums turned down which included the now much celebrated and covered song ‘Hallelujah’. They told him, ‘we know you’re great but we don’t know if you’re any good’. On its eventual classic status, Cohen said a mild sense of revenge arose in his heart. Now, ‘Underground Blues’ isn’t about Leonard Cohen but it’s about survival. There’s no smoke and mirrors in what I do and that can be rewarding for both the creator and the listener. Are we not all just trying to survive in some way?”

Written during the pandemic, Nothing Pressing isn’t the only thing that has kept Leger busy while off the road. In 2020 Leger published his first book of poetry Just the Night Birds, made a film for his mailing list subscribers The Apartment Show He Never Gave, while releasing what he terms a “surprise” album, Songs from the Apartment.

Songs from the Apartment was a stripped-down lo-fi affair recorded in his home using a cheap tape recorder with an internal microphone. Two songs from the current album, “Underground Blues” and “Sinking In”, were also recorded in Leger’s home, this time using two SM58 microphones fed into his vintage 1981 Tascam 4-track tape recorder. The remaining nine tracks included on Nothing Pressing present Leger’s work in two starkly contrasting soundscapes. “Nothing Pressing”, “Protector”, and “Still Patience”, are solo acoustic recordings cut live in the studio with little embellishment save Dan Mock’s overdubbed harmony vocals and, on the title track, producer Michael Timmins’ ukulele. The other six tracks are prime roots rock and roll featuring his long-time band The Situation (drummer Kyle Sullivan and bass player Dan Mock). Among the latter songs, “Kill It With Kindness” and “Have You Ever Been Happy?” have the kind of drive, energy and spirit that are sure to make them highlights of his future live shows.

Leger often times finds himself at a loss as to explain the source of his songs. He feels his songwriting, while clearly drawing on experiences filtered through a panoply of influences, often verges on being a supernatural experience. Over the course of the eleven songs on Nothing Pressing, the songwriter’s songwriter engages with questions of existence, mortality, hope, trust, and heartbreak while simultaneously conjuring feelings of isolation, reflection, longing, and gratitude.