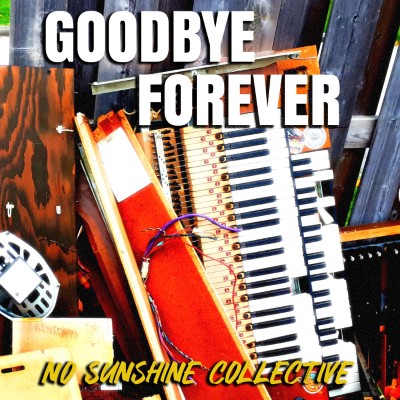 The band released their debut single, “Crash Myself Into You” in December 2021, and has now unveiled their follow-up single, “Goodbye Forever”. The single is accompanied by a cheeky music video, which you can check out below.

Take some time to find out more about the trio via our mini-interview, and stay up to date with them via their socials.

First off, care to introduce yourself to your readers?

Yes, I’m Steve and I play guitar and sing in No Sunshine Collective. My brother Nathan Colucci plays bass and sings harmonies and is our designated screamer guy. Matt Bellissimo holds it down behind the kit and boy does he hit ’em with everything he’s got!

You have just released your single, “Goodbye Forever”, what can you tell us about the writing process of this song.

The song is basically about letting go – to whatever/whoever that is – you interpret it to mean whatever to you though. Doesn’t have to mean the same thing to me as it does to whoever listens to it. Sonically, I was just in the midst of writing a bunch of songs and this one came out. I describe it as a punk rock take on a 50’s vibe. It’s basically a 50’s song just punked up, which I think is kinda cool. I was trying to make the guitars sound like a blissful messy cloud – almost shoe-gaze like if I can call it that. I dunno, I think I accomplished what I was trying to do with the song both feeling wise, musically, and also sonically.

You have an accompanying music video for the release, what was the highlight of the video shoot?

For me it was seeing it all come together visually – (shout out to Btown Sound in Burlington, that’s where it was shot – great recording studio). Our friend Ashton for lending us the sweet white jackets, Sasha for lending us her grandparent’s old radios, my mom for lending us her mom’s old telephone. All that stuff really made it come together and added a personal touch to the whole thing. Our friend MG Ommert shot the video and it was edited by Matt Bellissimo, they both did a great job. The highlight for me was how it all came together because of everyone who was involved. But I think the highlight for everyone was definitely the pizza at the end of the video shoot. Nothing like some pizza after working away for a few hours.

What else can we expect from No Sunshine Collective in 2022?

We have some cool stuff in the works, we will be at Tail Of The Junction on April 9th in Toronto; we have a small mini-tour in May going from T.O. to Ottawa then to Montreal ( it’s a small run but it’s a start – check the site for the dates and details!) We just shot/recorded a live session with our friend Keegan Porter at Banquet Studios – we will be releasing some of those videos in 2022. We will be releasing more songs and playing more shows as we do our thing. Come see us play a show and come chat/hang with us. We are all down to earth and friendly. You might hear the cheesiest jokes if you are talking to me, but you’ll learn to love it.