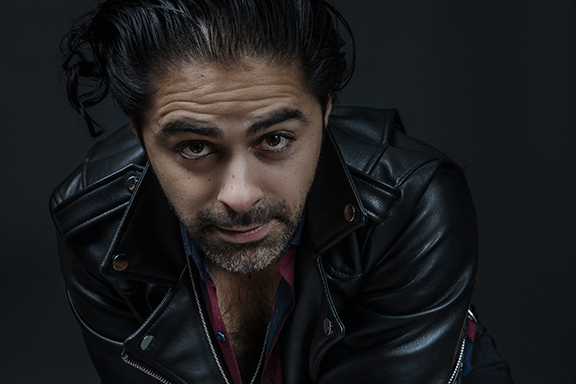 Toronto, ON-based powerhouse rocker jsin has recently released his new release, Surrender. Now, he has unveiled the new single, “You Can’t Stop Me”, along with a video to accompany the release.

Coming from a place of self-reflection, and accepting life at face-value after years of ponderance and questioning, the song reveals a journey jsin hopes will inspire his listeners to participate in as well.

“We all have insecurities,” he shares. “We all have struggles. We all question things. But we can’t let those things drive what we do. The things that hold us back.

“This song speaks to the process of surrendering to what is, instead of trying to control things. Every song is me expressing that I have to let myself be, let myself exist — not just let my thought processes or my ego drive my actions.”

Beyond lyrics that are meant to subtly self-empower, jsin’s newest release is ground-stomping hard rock at its best. Check it out below, and find out more about jsin via our mini-interview.

Firstly, thank you for being a part of my journey of putting myself and my music out into the world.

I started my artistic journey a little later than most. I never even attempted singing until my second year of university, where I sang “Patience” at an open mic night at a pub (on a night with $1 shooters). For me, singing was just a hobby and I only wanted to sing covers – mostly Guns N’ Roses. While I had written the odd poem prior, I never saw myself as a writer. Someone challenged me to write a song. That then sparked a journey of songwriting and recording. That journey includes several auditions for bands, DIY recordings and the odd live performance. Never got to join or start a band. The recordings weren’t great, but they were enough to connect me to people and get a few small shows. I recorded an album back in 2008 and then realized I had a lot of work to do to get to a place where I felt good about my music. Spent the last 10+ years training my voice. I’m never fully satisfied, but I’m here now. And I will continue to grow and learn and see what comes of it.

What did you learn from being a fan of Guns N’ Roses that you still use today?

I was both a Guns N’ Roses and an Axl Rose fan, and that’s important because I loved everything about the band, but it was Axl’s voice and stage presence that really struck me. For a long time, I just tried to imitate Axl. And I wasn’t a trained singer, so my technique was way off, as were my ‘warm up’ strategies. Today, I’m not drinking any alcohol before singing. 15 years ago…it felt like the right thing. None of that answers your question, but it was a huge part of the journey. From how I view vocals, to on stage performance, to the clothes I wear. I think there’s a little bit of Axl sprinkled everywhere, though it’s subtle enough that I’m no longer imitating.

Tell us about the making of You Can’t Stop Me. What started the idea?

The video is a direct representation of what made up the lyrics. In the midst of a pretty rough period, I had a good day and felt an optimism, like I knew I was going to get through it (“hungry like an animal, stronger than your control”).

I loved the television series ‘Orphan Black’, especially because it was one actor playing several characters. There’s a legendary Bollywood actor that did the same in many films. That always intrigued me and this song and video felt like the perfect opportunity. It was a lot of improv as the wardrobe of each character allowed for a very different set of movements and expressions. And, it’s all me, just split out into a handful of characters primarily based on wardrobe. Each character has a will, but who wins in the end?

What’s the best part of being an actor?

Being an actor gives me permission (and reason) to explore parts of me I may have only imagined prior. I understand myself a bit more, and even learn more about my songs, sometimes years after I write them.

You get to see one artist, anytime, anyplace, in concert – who would it be and why?

I’ve seen many of my favourite bands live, but one artist I wish I got to see is Prince. Coincidentally, I watched Purple Rain the other day and imagined what a live show would be like. His musicianship, his attitude, and the wavelength he’s on…I wish I could have experienced that in person.