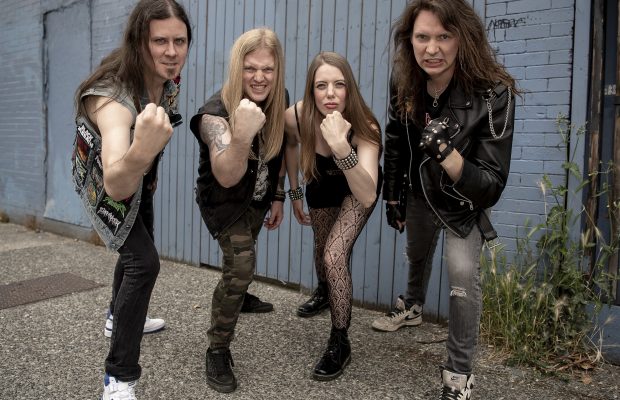 Vancouver, BC-based thrashers Hyperia will be self-releasing their new album, Silhouettes of Horror on March 18, 2022. The full-length follows their 2020’s Insanitorium unleashed via Sliptrick Records and their 2019 EP Fish Creek Frenzy.

In preview of their album, the band has unveiled their second single, “Experiment 77”. The song is about a government experiment that actually happened in Kentucky in 1954 where a prison doctor isolated inmates and fed them “double, triple, and quadruple” doses of LSD for 77 days straight.

“We think that we have polished our sound and pushed ourselves to create what we believe is a newly refined vision. This record has pushed the whole band to their limits, and the songwriting, performance, and production value is a huge step up. We feel the fans will enjoy this new album even more than our first full-length,” adds Collin Ryley.

Check out “Experiment 77” below, and find out more about Hyperia via our Five Questions With segment.

My name is Marlee and I’m from the band Hyperia. We are a Melodic Thrash Metal Band originally from Calgary, AB, Canada now based out of Vancouver, BC, Canada. Colin and I formed the band in September of 2018 and found talented musicians in the Calgary Metal Scene.

We parted ways with our drummer Jordan Maguire earlier in the pandemic, but in order to get our album out sooner, we hired a session drummer. This was Gord Alexander from Edmonton, AB Canada. (Gord’s projects: Tessitura, Tides of Kharon. & previously Immunize.) Currently, we are looking for a drummer with some very promising leads.

Colin writes the majority of the music with input from Dave. Scott handles all his bass lines and amps the songs up even more. Musically, Colin takes a lot of inspiration from Scandinavian Melodic Death Metal bands, New-Wave thrash bands like Havok, and Warbringer, and even some classical music. Lyrically I tend to think of one topic and go from there. Research ideas and ways to structure the song. I try my best to experiment with new writing styles as much as I can.

We are very lucky to have 3 members living in one household. This makes it easier to collaborate on new music ideas etc. Also with the help of technology we were able to have Zoom meetings with our Bass Player Scott. From being part of different projects to finishing up the creative process with our new album it’s been easy to stay creative.

Personally, I would say Intoxication Therapy. It’s one of our more fun Thrashy songs. It has a classic 80s Thrash feel with our added Hyperia Melodic flare.

WMD, Illyrian, Invicta, Unleash The Archers, Iron Kingdom, Archspire, & the Agonist. That being said there are too many favourites to list.