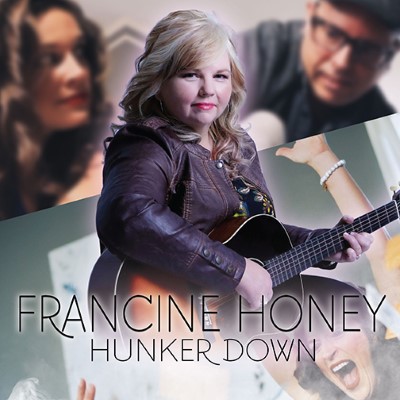 Ottawa, ON-based singer-songwriter Francine Honey has unveiled her new single, “Hunker Down”, which reminds couples that even in a crazy busy life, you need to take time for each other.

“Between the bills, kids and work there’s not much time for me and you,” laments Honey as she reminds us that every once in a while, couples need to put the life back into ‘life together!’

“Hunker Down” leads the way on finding the passion again with this upbeat new single and video blending the very best of Americana, Country, and Roots with layers of guitar, fiddle, and smooth, honeyed, soaring vocals. “Hunker Down” focuses on the romantic side of a long-term couple hunkering down at home.

Evoking a wild ride where you roll the windows all the way down to let your hair blow in the wind, “Hunker Down” highlights the playfulness at the heart of any good romantic relationship, and gives us all hope that, amidst the craziness of life, love will ultimately win.

The accompanying video plays into Honey’s commitment to providing a visual connection to the songs she’s written.

“When I write a song, I imagine the movie that is playing for these three minutes and eventually it becomes its own movie in a video.”

“Hunker Down,” penned with collaborator Dan Washburn who also lends his vocals on the track, finds itself on Honey’s newly released LP, I Carry On. With 12 tracks consisting of a mix of five new songs and previously released singles, I Carry On has already received international recognition and touched many of Honey’s fans worldwide.

Check out the video for “Hunker Down” below, and find out more about Francine Honey via our mini-interview.

I am a songwriter, singer, multi-instrumentalist, recording artist, director and video producer and even writing that all seems surreal since I never ever thought that I would ever be able to do what I do for a living.  I’ve been writing songs since I was 12 years old, but I only started sharing my music later in life.  I never thought I could “make it” when I was younger, so I went to university and got a degree in Mathematics and Computer Science.  That served me well since after I got married and had two children, my husband left, and I raised my 2 beautiful children on my own.  I wrote songs during that time and worked with the Canadian Federal Government as an IT project manager designing web-based applications for all three research granting agencies.  I loved designing systems and helping people simplify their work using technology.

Flash forward to the day I simply couldn’t do it anymore because songs were consuming my every non-working moment.  I would dream of songs, wake up with songs in my head, get songs during coffee breaks…they were ghosts haunting me to be written.  I started working on a plan to quit my job and downsized to the cheapest apartment I could find and saved my money.  Saved, saved, saved until in 2013….  I did it!  I made the jump.

I just released my 4th full-length album, entitled “I Carry On” along with an EP, and numerous singles.  I’ve won songwriting awards and my music has been played all over the world.  Most importantly, I hear how my music is helping people and that is what keeps me going.  I write about my life and experiences as many songwriters do and my hope is that by sharing my story and how I’ve overcome obstacles that it will inspire others and will help heal the wounds that life brings.  My mission is to help people get through life, know they are not alone in their experiences, and heal with my music.

Tell us about the making of Hunker Down. What started the idea?

As all of us Canadians know, we have had extended and multiple periods of restrictions and lock downs and I am so fortunate to have been locked down with my partner.  We would look at each other and say, “I guess we’re gonna have to Hunker Down again”.

When I’d talk to friends on the phone, I heard about how their partners were helping them through.  How they became closer as a couple.  I felt the same but after an extended time inside, we were all going stir crazy.  I knew so many people who had kids at home and were desperate to get away for a much-needed getaway. We all started planning at home date nights.    That was the start of the idea for this song.

I asked Dan Washburn to write this song with me and as we were talking about it, we didn’t want to limit the song to the pandemic, even though it was the spark that started the idea. Before the pandemic, we have both had times in our lives when we either couldn’t afford to go out or couldn’t find daycare, so that became the inspiration for “Hunker Down”.

I love this question lol….  I guess we aren’t so inventive since our “date” night normally involves ordering in and a surprise movie that my “Honey” has picked out.  My favourite at-home date night was the night we did an Escape Room board game together!  It was hilarious because we had no idea what we were doing. We did NOT make it on time and ended up googling some of the answers but it was fun working out the puzzles together and laughing!

You get to see one artist, anytime, anyplace, in concert – who would it be and why?

That’s easy Bruce Springsteen.  I’ve already seen Bruce 8 times, but I would see him again in a minute because he is the whole package.  His songwriting is top notch and he tells stories through his songs that connect the human experience together as a the common thread that it is.  He also creates an experience for people seeing him live whether he’s solo or with the E Street Band.  He keeps creating.

What’s the best part of living now in Ottawa?

Ottawa has always felt like home to me because it is where I raised my children and even though they are adults, it is fantastic being able to be part of their lives in a real tangible way as opposed to from a distance.   There are many other things I love about the city but the best part is being closer to family and friends.  The importance of family and friends is one thing the pandemic has taught us all and I’m fortunate that I can work from anywhere.