îLESONIQ drops phase 1 of its 2022 lineup

îLESONIQ, Canada’s most influential dance event, is back to celebrate its 7th edition next summer! Today, the lineup is finally here, and it’s a solid one! The 3-day non-stop dance party will take place August 5-7, 2022 at Espace 67 on Montreal’s picturesque Île Sainte-Hélène, with îLESONIQ en ville to launch the festivities in the city on August 4.

In addition to previously announced headliner Swedish House Mafia (who are only playing two North American festivals – îLESONIQ and Coachella), the îLESONIQ team has put together a stellar lineup of DJs and performers that will have the crowd in electronic rapture for 3 days straight – including several artists from the LGBTQIA2+ community, as well as the presence of female artists on each of the stages each day. The îLESONIQ family always strives to put together an inclusive event, where fans are encouraged to express themselves and to come as they are. The festival will continue to expand in exciting and diverse ways in the years to come! 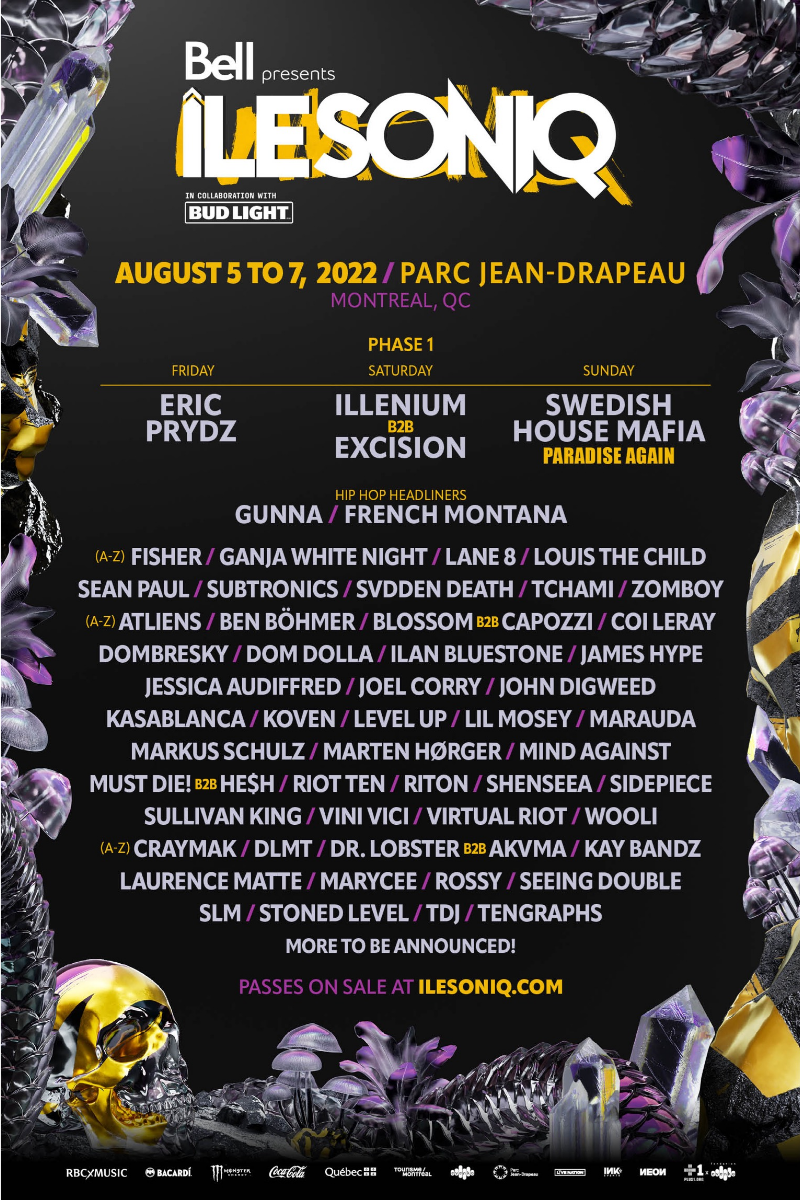 Friday’s lineup includes legendary Eric Prydz, who quickly gained notoriety as one of the world’s most sought-after DJs early in his career and who continues to prove why he is at the top of the list. The versatile producer and DJ solidified his status as one of the all-time greats, winning DJ of the Year at the Electronic Music Awards in 2017, and playing to sold out crowds all over the world. Prydz hasn’t rocked a Montreal stage since 2015, but that will all change when he headlines day 1 at îLESONIQ 2022.

Australian DJ/Producer and house music megastar, FISHER, will be on hand as well to turn the party up to eleven! The Grammy winner will unleash his own special brand of crowd control, with his signature brand of house music that will make fans freak out, left, right and center. Also on Friday, German DJ/Composer Ben Böhmer will serenade the sky; his Anjunadeep label-mate Ilan Bluestone, will make his triumphant return to his favourite city (to give back to a crowd that has been so supportive of him over the years); and UK drum & bass act, Koven, will move the crowd with powerful vocals that will surely stop fans in their tracks.

Saturday will be a special day, with two of the world’s biggest bass acts performing an extremely rare B2B set. Illenium B2B Excision is reason in itself to attend this year’s fest! The îLESONIQ team is thrilled to be able to present this set – a Canadian first – as it is one of those rare events that has only ever happened a few times in the past.

Saturday is also the day for hip-hop fans, with can’t-miss performances from the likes of dancehall legend Sean Paul, who’ll surely raise the temperature with his imperial blaze and all-in pop sensibilities; Gunna, who’ll prove why he is the hottest hip-hop star on the planet right now; and American rapper Coi Leray, who has captivated the entire globe as a TikTok phenomenon with the massive success of her song, Twinnem.

Sunday‘s lineup is a juggernaut, with the much heralded return of Swedish House Mafia to the stage. Beloved DJ duo, Louis The Child, who colour their pop/EDM with shimmering tones and dreamy sounds; melodic house champion Lane 8 who will be taking the stage in support of his brand new album, Reviver – easily his most dance-floor focused album yet; Wooli, representing the ever evolving dubstep movement; and Markus Schulz, the globetrotting German DJ who will be performing a sunset set, which will undoubtedly bring the crowd into a euphoric state on the last day of a full weekend of ecstatic fun.

Festival passes go on sale this Friday at noon at www.ilesoniq.com. General Admission 3-day pass start at $295 CAD, and RBCXMUSIC Gold 3-day pass (with access to the RBCxMusic GOLD Terrace, a platform offering a premium view of the main stage, with access to private washrooms, an exclusive beverage stand and a fast-lane entry onto the event grounds) start at $500 CAD.