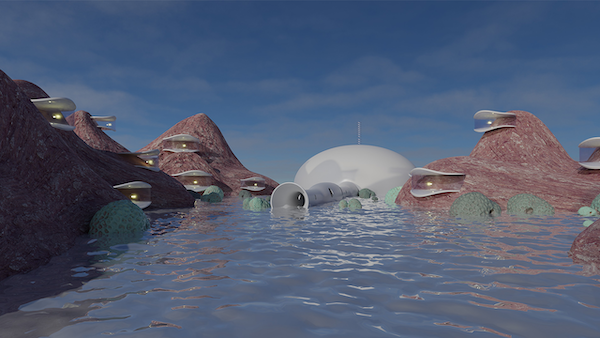 “Infinite Program” is Maylee Todd’s latest single from her debut album Maloo, out March 4 on Stones Throw. The song is accompanied with a 360° virtual reality video created by album collaborator Kyvita and directed by Maylee Todd.

The “Infinite Program” video depicts a fictional planet which “finds nourishment on the inhabited species’ psychology, where their mental states reflect the condition of the planet’s resources. When the species are working together, the planet can flourish. But if the species don’t take care of their mental health and those around them, the planet diminishes. The video focuses on the design of the planet, the living quarters of the species, and the technology they use to improve their planet.”

Maloo is a concept album of “science fiction lullabies” named after Maylee Todd’s digital avatar. Throughout the pandemic, Maylee spent a lot of time in VR, and started thinking about the utopian possibilities of the technology. “Often we place too much emphasis on status, wealth, and clout on social media,” she says. “Instead, what if we find ways to share our dreams and goals for ourselves and society? Tapping into our creativity and imaginations rather than having to preserve status or identity for acceptance.”

Maylee created the avatar “Maloo” to attempt to address these questions. The songs on the album Maloo are told from the avatar’s point of view, set in a world called “The Age of Energy”. This world, portrayed in the video for “Show Me”, was conceived, created and animated entirely by Maylee. In this imagined world, empathy, mental health, and creativity are elements for survival.

Creativity, performance and humor have always been a big part of Maylee Todd’s life. Her father was an Elvis impersonator and her grandfather was a UFO obsessive and escape artist known as ‘the Great Toddini’. Maylee herself has a background in standup comedy and dance as well as music. Maylee has built immersive experiences around her albums before, including the world-travelling “Virtual Womb” show, but Maloo is her first virtual world.

Although Maloo was conceived in the virtual realm, the album’s subject matter is firmly drawn from Maylee’s personal life, especially her experiences with mental health. “Show Me” is a song about vulnerability, and the shame and stigma surrounding presenting your genuine self. Other songs on Maloo look at the effect of social media on self-worth, the expectations placed on women as they get older, and negative thought patterns.

Maylee originally wrote the sketches for Maloo on a Tenori-on, a discontinued Japanese sequencer initially released by Yamaha in the late 2000s, before refining the songs with co-producer Kyvita. On Maloo, Maylee tells stories of identity, personal growth, and mental health – all with a playful and satirical sense of humor.