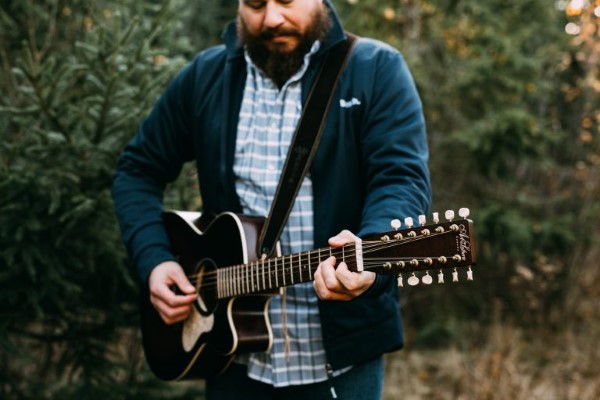 Ontario’s own Ryan Thomas Smelle has recently released his debut album, In The Homestretch, as well as his leadoff single, “Novel Study”.

““Novel Study” was written about my 4 favourite children’s books from when I was a kid. It was a challenge to sum up an entire novel in 2 lines, but it works.

Having just built my own studio during the pandemic and still learning the ins and outs of recording, I enjoyed including the horns and keys to fill out the sound. Technology has come so far. Being able to add elements I hear in my head, on my own, has opened up so many options when devising and writing a song.

Spending hours and hours mixing your own tunes can make them tiresome to the ear, but not Novel Study. There is something magical about this track that makes one love it a little more with each listen.”

Check out the lyric video for “Novel Study” below, and find out more about Ryan via our Five Questions With segment.

I’m a singer-songwriter from St. Catharines, Ontario, and have been playing and writing music for over 25 years in a variety of different genres. I love to include my family in my creativity and you can catch my kids in several of my videos. By day, I am a school teacher and aim to inspire kids to never stop following their dreams. Lastly, I love to share my passion with others and am fulfilled when someone reacts emotionally to my music.

“Life happens. Sometimes it’s good. Sometimes it’s bad. Really bad. My story is your story. Wearing your heart on your sleeve is not a bad thing. Love often and listen always.”

I’m a singer/songwriter with an acoustic approach to storytelling using hook-laden songs in the areas of folk, indie, alternative, North Americana, and pop. I enjoy expressing my heartfelt self through my lyrics and connecting with the audience by relating to their own life experiences. Life, death, love, loss, happiness, mental health, and grief are all depicted at times in my tunes. Each song is simple, minimalist, and candy for the ear. I’m not trying to reinvent the wheel, but am trying to share a relatable journey on a familiar canvas.

Out of necessity, the pandemic forced me to change. This leads me to build my very own recording studio which I’ve called ‘Homestretch Studios’. As I slowly learned the ins and outs of recording, I managed to release a song each month. After a year and some amazing feedback, I took the 12 tracks, remixed them, had them professionally mastered, added 2 other songs, and created my first solo album titled ‘In The Homestretch’ released January 2022. I’m also taking this a step further and will be launching my own record label, ‘Homestretch Records’, in the later half of 2022.

The most relatable song off of ‘In The Homestretch’ is titled “Easier Said Than Done”. It’s a 3 minute Jack Johnson-esque bop about how we all have things we wish we’d do, but never get around to.

“Something Restless” seems to turn some heads as well and highlights my ongoing battle with anxiety. We all struggle sometimes and this song reassures us that it’s OK.

“Ripples” off of my EP ‘When Grey Turns To Red’ is about a friend of mine who became an angel too soon. I have had numerous people reach out to me about this song and how it hit them. It is roughly recorded, but that’s what lends to its authenticity. Written and recorded over a few days on a dock overlooking Balsam Lake.

I’ve really been in a Gordon Lightfoot frame of mind lately, but am also currently into and influenced by Sam Roberts, Serena Ryder, Afie Jurvanen (Bahamas), Jesse Roper, Elliot Brood, and The Strumbellas.