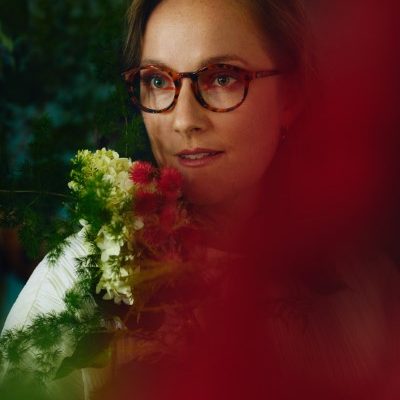 Following her singles, “Swim” and “Love & Retreat“, Toronto folk artist Sarah Hiltz started the new year with a new track, “May I Rage, May I Love“. The song is centered around how anger connects with spirituality, the concept of justified anger, and safe spaces. The video was directed by Sandi Barrett, capturing stunning, monochromatic scenes of people in deep reflection, coming to terms with their anger and fears, meeting them in spaces with love and catharsis.

“This song is full of close notes held in tension, a kind of audible mirror of the internal struggle I go through in allowing myself to get angry when I see wrong in the world while still holding true to my deepest value (love). Rage and Love feel like they’re at odds with each other (at least to me), but I believe it’s in balancing them that I might be able to contribute to shifting the injustices that cause harm across the globe. Learning how to hold both of these things at the same time might be the most important spiritual work I ever personally do.”

Now, only in the second month of 2022, she’s back with not one, but two new singles, which both have beautiful videos to accompany the releases. The singles, “Retching In The Wings” and “Calm Fury” have both been unveiled.

The songs reflect on the singularity of women’s anger. Sarah drew from additional references, including Wisdom For Cooling The Flames by Thich Nhat Hanh and footage of Sinead O’Connor getting booed at Madison Square Gardens for ripping up a photo of the pope in protest of the Catholic Church’s history and perpetuation of child abuse.

On “Retching In The Wings”, Sarah knew she wanted to somehow capture what she had seen in the video of Sinead in the form of a song, and upon performing the track in front of live audiences, and experiencing their reactions, began to grasp this (read more on the process below).

The album’s title track – Calm Fury – became the most fitting oxymoron, with some of its themes prominently visible in the album artwork.

Sarah shares on the songwriter process of “Calm Fury”,

“I had been thinking about the idea of controlled burns—setting fire to unhealthy parts of a forest to prevent wildfires that could do much worse damage. And of course, there are safety measures whenever this happens—the blackline or the firebreak—places where the fire can’t easily reach. In the song, I’m recommending the listener to stay in those zones. I’m not coming for individuals with my anger, I’m not interested in tearing anybody down. But I am ferociously angry about systems that cause us harm and allow individuals to cause others harm, and I’m very interested in setting fire to those systems, for the sake of a healthier metaphorical forest for us all to live in.”

Sarah comments on the songwriter process of “Retching In The Wings”,

“I knew I wanted to somehow capture what I’d seen in that video in song form, so when I headed to Banff for a songwriting residency in March 2019, Retching In The Wings was the first song I completed there. I started performing it live right away, and it remained a staple in my sets for a full year, until everything shut down because of the pandemic. The amount of times I sensed the room tense and even saw some folks shifting in their seats while I told the story about a woman being angry enough to do something about it, and about how I related to that, was astounding,” Sarah says. “This sunk in over the course of a full year of playing this song and observing audience reactions, and I found it both disappointing and concerning. We are all human beings meant to experience the breadth of human emotion, including anger. That doesn’t have to be negative or even divisive. It’s true it might be uncomfortable, but discomfort and danger are not the same thing.”