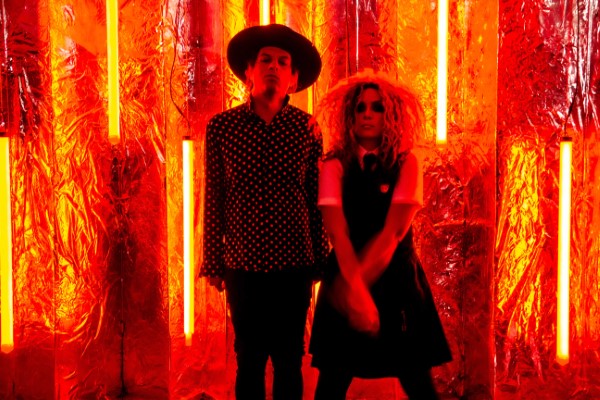 Toronto, ON-based rock duo, The Manic Boys and Girls Club have unveiled a remix to their track, “Blacked Out” by composer, producer, and musician Paul Andrews.

“’Blacked Out’ is a cry for help in disguise,” The Manic Boys and Girls Club admits. “We’re lost, overmedicated, depressed and hiding behind bathroom selfies, late nights, and lip gloss.

“’Blacked Out’ is a cry for help in disguise,” The Manic Boys and Girls Club admits. “We’re lost, overmedicated, depressed and hiding behind bathroom selfies, late nights, and lip gloss.

In its original form, “Blacked Out” already rages out of the gates, unrelenting in its pulsating bass and ineffable synth. Now, Paul Andrews’ treatment of the track reveals an nostalgic, ethereal vibe unique to the composer behind endless scores for the likes of HBO, ABC, NBC, FOX, MTV, WWE, and OLN releases, and more could wrangle.

“We met Paul in Los Angeles,” Bela recalls. “Neither of us remember who exactly put us in touch; I don’t know if it was the ‘European background’ thing, but we hit it off right away.

“We listen to a pretty wide spectrum of music,” she continues. “One guilty pleasure of ours is retro new wave, and some of the heavier electronic music that came from that. When we talked about doing a remix, our British friend with an industrial and goth background who now scores European horror films seemed like the obvious call we had to make.”

“Besides being a great producer and musician, Paul is the best storyteller,” Fernando adds. “Having had multiple record deals, tours, and even living in an apartment off Sunset Strip next to Motorhead’s Lemmy, there was never a shortage of material. Whenever we’ve been together to work, the time spent has probably been spent 10% on productivity, and 90% just hanging over beer.”

Check out the lyric video for the Paul Andrews Remix of “Blacked Out” below, and find out more about the duo via our mini-interview.

We are siblings and band mates. Bela and Fernando. Collectively: The Manic Boys And Girls Club.

Tell us about the making of the remix for Blacked Out. What started the idea?

We listen to a pretty wide spectrum of music, so the idea of a remix or alternate version touching on other genres isn’t that unnatural to us. When we write, we actually don’t think about genre too much. It’s really about what we’re saying and how. Guitar sounds, tempo, the feel; that all happens naturally after the fact. Whatever that ends up coming out as I guess is what sounds like The Manic Boys And Girls Club. I feel like any remix is like an extension of that concept.

Blacked Out is based on a night out, alcohol and EDM. It’s like it was begging for a remix.

How did you know the work of Paul Andrews?

We met Paul in Los Angeles and used his home studio for some demos. He is such a great musician, producer and just overall person. Paul is the guy who introduces you to the cool bands you’ve never heard of, the B-sides, the electronic side project of an artist you like. After being introduced, we became fans of his previous work and bands, recent scoring and his incredible LA stories… so much dirt on so many people.

You are now the DJ of your own club – what’s the sure-fire song you spin to get everyone on the dance floor?

Look Back At It by: A Boogie Wit Da Hoodie, but in the DJ booth with me would be Phil Collins behind a drum kit and he would bust in to the classic In The Air Tonight drum fill when the chorus drops.

What’s the best horror film out there?

Swiping through movie options one night, I discovered what is now one of my top favourite films. The Devil’s Rejects by: Rob Zombie.

The music, gore, violence, suspense… All the elements of what a classic horror film should be.