Five Questions With Fall of Stasis 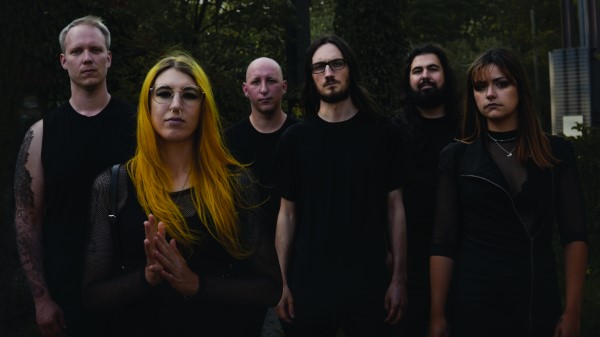 Montreal, QC-based band Fall of Stasis was originally formed in 2014, releasing their demo in 2017, and following it up with their full-length, The Chronophagist in February 2022.

Their newest single, “The Cult”, which is from their album, is about a pagan cult that heavily indulges in psychoactive substances. The song starts with a syncopated section followed by a folky yet intense main riff solidified by fast and sustained blast beats.

“This song was probably the one that was written in the shortest amount of time. Tristan had written the main riff many years ago and we all liked it, so we decided to write a song based on it. We felt it was catchy and upbeat, but still dark and aggressive enough to catch the listener’s attention. We chose this song for our clip because it’s a short and well-rounded song that gives an accurate depiction of the sound we’re going for and the theme would easily translate into an interesting storyline for the video. The dark lyrics coupled with upbeat riffs make for an interesting contrast that brings the song to another level.”

Check out the video for “The Cult” below, and find out more about the band via our Five Questions With segment.

Hey guys, we’re Fall of Stasis from Montreal and we’re just about to release our debut album “The Chronophagist”.  We have no idea how to categorize ourselves, but we’d love to see you try!

Someone comes up with an idea (can be a single riff or a complex arrangement) and everybody chimes in, and this is what makes our sound unique since it blends all of the members’ musical influences. We never move forward with ideas that are divisive among the band members, and it makes for a very healthy and relaxed atmosphere during the creative process.

We were about to start recording our debut album when the pandemic hit, and the whole situation really set us back.  Instead of writing new material, we used this unfortunate opportunity to fine-tune our material and reconsider some of the decisions we had made regarding the album.  Ultimately, it was a blessing in disguise since we can now release our new opus without compromising on the depth of our music.  That being said, it’s no longer a blessing since we can’t play live shows.  Fuck COVID.

The eponymous track “The Chronophagist” goes through a very wide array of genres that we flirt with throughout the album, so it’s probably the one that represents us the most.  It’s really hard to pick just one though, so just listen to the whole thing.

Devin Townsend, Archspire, Beyond Creation and Protest the Hero!