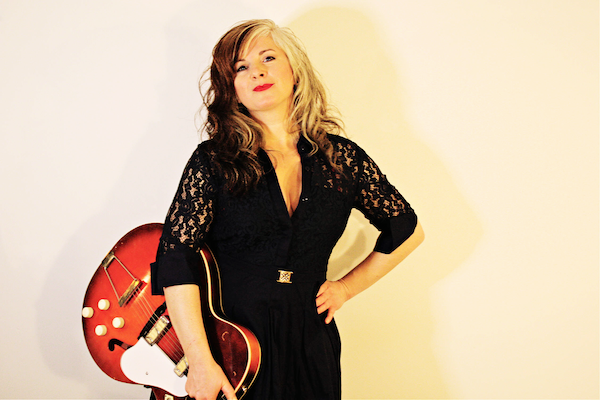 Award-winning musician and songwriter Little Miss Higgins has announced her new, multifaceted project, The Fire Waltz, is both a five-part miniseries podcast and a full-length album. She has unveiled the first single, “Three Days on a Page”.

Inspired by stories of her great-grandmother, Eva Bersay, Higgins has created a one-of-a-kind audio experience—a riveting tale of an extraordinary woman. The Fire Waltz follows Eva on her journey to Canada from Jersey Island, off the northern coast of France, during the early 1900s, depicting the power and perils of love, the realities of a world at war, and the uncertainties of the aftershocks. Using old photos, postcards, letters, a travel journal, and stories gathered from family, the music-driven project took shape in October 2019. Higgins and her two main collaborators, Kris Demeanor and Eric Rose, began by telling the story through song titles. After that, eighteen songs were written in 12 days.

Initially, it was intended for theatre, but due to the pandemic, Higgins switched the approach to be completely auditive. She wanted to link the songs with narrative, drawing on ideas of old radio plays. Script was written, more artists were gathered and even more songs were created. Working both in-studio and remotely, Higgins and her extremely talented team from across Western Canada recorded the music and the script. Then she sound-designed the entire piece while recording engineer, Jamie Sitar, put everything together. Thus, Season 1 of The Fire Waltz has come to fruition.

The first single was inspired by a travel journal.

“This song specifically follows my great-grandmother riding an immigrant train called the Galloping Goose across Canada,” says Little Miss Higgins. “One of my collaborators, Kris Demeanor, took the lead on the lyrics of this one and does the intro. Then, I take over the main vocals in the recording, backed by some of Manitoba’s finest musicians: Gilles Fournier on bass, Joanna Miller on drums and Darwin Baker on harmonica.”

The first episode of the podcast will be released on February 14th with weekly episodes until the final chapter on March 14th to coincide with The Fire Waltz album release day. So be sure to follow along with those, and check out the single, “Three Days on a Page” below.