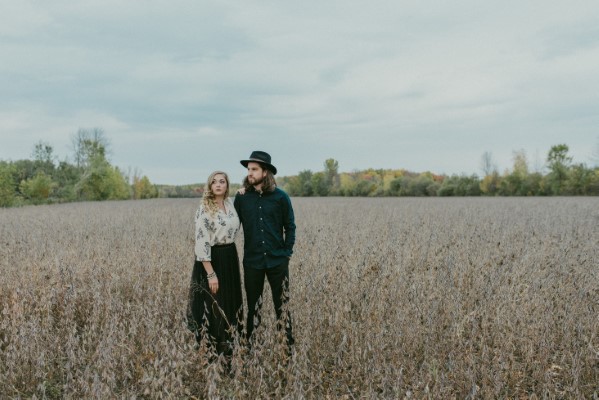 Montreal, QC-based emerging duo, The Night Owls are set to release their debut album, The Night Owls this Spring. The band has unveiled the title track, and a video to accompany the release.

The debut single, “The Night Owls“, is a mysterious, slow-burning folk track, centered around the pair’s vocals and harmonies. Perfectly fitting, the couple was awake composing this track until as late as 4:00 am, writing about their lives as night owls. It’s about the feeling of being alone with one another, taking walks outside, and feeling as though they’re the only ones in the city awake. “We like to play music at night,” describes the couple.

“The only thing that matters is each other, because in those times we feel like there’s only the two of us in the universe.”

They found great comfort in this time together (but alone) during the worst parts of the pandemic.

The video consists of scenic views of the starry night and the presence of two stunning live owls, the video encapsulates the meaning behind the folk track perfectly.

“The main idea of the music video is us as Night Owls trying to find our way in the darkness,” explains The Night Owls. “We like to play music at night,” describes the couple. “The only thing that matters is each other, because in those times we feel like there’s only the two of us in the universe.”

Check out the video below, and find out more about The Night Owls via our mini-interview.

We’re Simon Arsenault and Marianne Bourgeois, The Night Owls. An indie, folk, rock, country duo from Montreal as well as a couple who’s been working on an album since the beginning of the pandemic.

You have just released your debut single, “The Night Owls”, care to tell us about that?

The Night Owls is the song that most represents the general sound of the upcoming album and that’s one of the main reasons why we wanted to release it first. We have other songs that go as far as funk and blues but the album is mainly indie/folk just like our first single.

The single comes from your upcoming debut self-titled album, what can you tell us about the upcoming release?

As a couple stuck at home during the pandemic, we started writing songs and putting together music that fit with lyrics Marianne had written. Those songs multiplied and in no time we had a collection worthy of an album.

We shot 4 music videos while having 4 single releases in mind:

Is an indie rock ambient song about the aftermath of depression and an optimistic look at the future. We have really dark themes throughout the album but this is going to be the last track to make it end on a more optimistic note.

A country-rock ballad with Pink Floyd and Crosby, Still,s and Nash influences. We are planning on releasing the album at the same time as this single.

The video for “The Night Owls” has just been released, what was the highlight of the video shoot?

You seem to have a busy year planned, what else is coming up in 2022?

Hopefully, we are able to release everything we want to release in time. After that, we plan on doing live session videos, covers and being as present on social media as we can to promote our music. As for live shows, we’ll have to see how everything goes with the pandemic but playing our music in front of a live audience would be great.