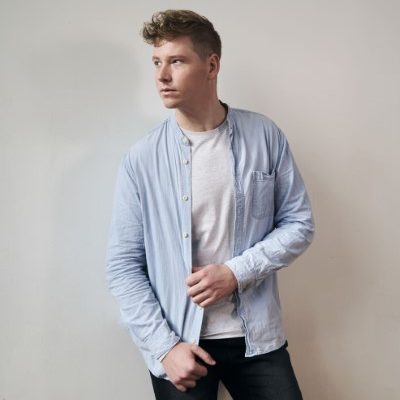 Graham Scott Fleming, hailing from of Elmvale, Ontario, is an emerging singer-songwriter who also been honing his performance skills for the past nine years working as a theatre and film actor in Toronto and on Broadway in New York City. He has since moved back to Ontario and in 2021 released his new single “Déjà Vu,” his first in four years. He is kicking off the New Year and a bright outlook on 2022 with the release of his new single “Better Man” via all streaming platforms. It’s written solely by Fleming and is one born of personal heartbreak and resilience.

Fleming says this about “Better Man,”

“This song truly started out as a journal entry. I was going through a tough time. Was being a little self-destructive and just sinking into, as a line in the song says ‘self-pity.’ It took me some time to realize I was basing my happiness on other people and specifically the other person in this scenario. I wasn’t giving myself the love I needed to pull myself out of the situation, but also in general. I am genuinely a lover by trade but sometimes you give your love away so much that you don’t leave enough for yourself and so this song is just a reminder that I am enough, to love myself and to take these lessons and grow from them.”

I caught up with Fleming for a quick Q & A, via email, to find out a little about “Better Man.” People love new music and all the emotions that it brings to them when they hear it for the first time and we at Canadian Beats would like to congratulate you on the release of your single “Better Man.” With that being said, let’s chat about it.

I think “Better Man” is a beautiful post-break-up tune that is very empowering. After listening to this single I feel that, through your music, you are sharing part your personal life story. How does it feel to take those emotions and put pen to paper?

Wow, thank you so much for that! It has for sure been a journey from when I first started writing. I used to write songs just to be catchy, or because I thought it was what people wanted to hear. Now, I write songs based on how I am feeling in that particular moment or day. “Better Man” specifically, was a journal entry from a time when I was feeling really defeated from a break-up. I was starting to lose myself. Though I had friends reaching out and trying to help me, it wasn’t until I personally realized I needed the change. That I needed to reach out the helping hand to myself and pull myself out of this ‘pity party’ in order to be the ‘better man’ I wanted to be. Putting these emotional and vulnerable moments from pen to paper is difficult yet rewarding. It’s hard to relive certain moments for sure. It’s also hard knowing people connect to it as I wish pain or sadness for anyone. With that being said, if people can connect to these lyrics and get uplifted and feel a shift like I did, then I did my work as a writer!

“Better Man” was produced by four guys who go by ‘The Agenda.’ I was introduced to these lads in 2016 when they were hired to play my first EP release. We kept a solid friendship and when they started getting more into the production world, we decided to work on this project together. We recorded five songs and so far out of the five, we have released three singles. “Déjà Vu,” “High Life” and “Better Man.” These guys are young, top of their craft, and have a great ear for rhythm. Can’t send enough love to these gents!

This single is currently taking off in Canada with Stingray Radio featuring the song as a ‘Trending Track’ and Rogers Radio selecting “Better Man” as ‘One to Watch.’ The single debuted at #48 on the Mediabase Canadian Country chart and has been featured on Apple Music playlists from U.S. radio personalities Ty Bentli and Hunter Kelly, as well as on Spotify for ‘Fresh Finds.’ Describe the feeling when you saw all this?

Holy moly. I am still just blown away every day at the love and support this song is getting. When I got the call for the Stingray feature ‘Trending Track,’ I was eating McDonald’s walking the streets of NYC. I was down on myself at that moment and Shilo from Stingray gave me the call to give me the news. HOLY MOLY! I couldn’t even get a word out and not because I had fries in my mouth lol. My friend/radio promoter Dani Strong has always believed in this song as much as I have and has been working the song so hard! To have it recognized by a major radio company was massive. Not only that, then Rogers came on board at the same time for ‘One to Watch’ and we will never show the screenshots that were taken when I found out lol. Let’s just say I was freaking out. ON TOP OF THAT, for streaming services Hunter Kelly and Ty Bentli showing the song love adding it to their playlists as well as editorials on Spotify for ‘Fresh Finds’ was just so validating. I understand how lucky I am to be receiving all this love, especially as an Indie on radio! I put my whole heart in that song and for it to be growing and reaching Canadians across the board is just so darn heartwarming. A literal dream.

I hope anyone who hears the song can truly hear the journey. Though this tune is wrapped up in three minutes and 30 seconds. The journey was not an overnight event. I am lucky to have an amazing support group of friends and peers who I feel very comfortable to reach out to. Sometimes though, no matter how much you or they reach out, you are not ready to receive the message or help they are trying to give or you are hoping to receive. YOU need to want to get better. YOU need to do what YOU need to do to get yourself in the right mindset to want to do better and be better. It truly is a journey and will always be a journey. We can always be better. Just truly understanding, life is going to throw you curveballs every now and then, navigating the curve is up to you. YOU make the decision to drop the ball or throw it back. Be a badass, a better human, and enjoy each day we got.

One last question. As a songwriter, give us an insight into your creative process. What gets you writing songs?

I feel this one is ever-changing. I could be walking, driving, with a friend, watching TV and a phrase or a melody will appear in my head, and so I record a voice note or add a lyric into my Notes app on the phone. I pull inspiration from my own life, but also the lives of those around me as well. I know a lot of writers who like to start with a title or an idea but a lot of times for me it starts with an emotion. I sit down with my guitar or piano and I strum a bit or play on the keys and start humming out a melody. Then I start throwing out lines and finding better ways to say that line. I generally, for the majority of my career, have been writing solo. I am now dabbling in the world of co-writes. In the beginning of co-writing, I felt I wasn’t opening up enough. I wasn’t as vulnerable as I would be if I wrote alone. Then you quickly realize, these are artists too who feel very similar emotions or have. It’s like anything, the more you practice the better you get. Also, working with others opens your mind and gives you phrases or lines that you would have never thought of potentially. So, all in all, it’s a really cool journey!

We, at Canadian Beats, thank you Graham so much for taking the time for this interview. We wish you much success with all the great stuff that is coming your way.