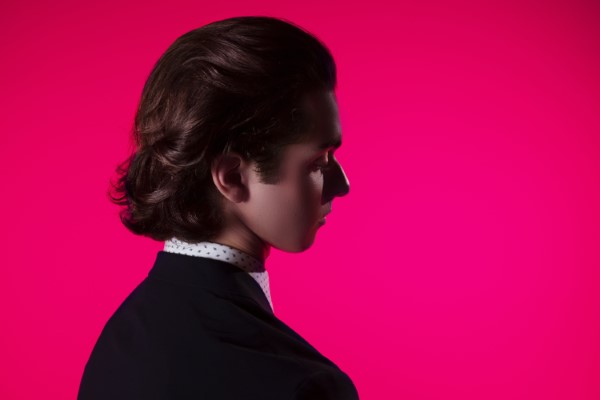 Canadian pop singer-songwriter Max Parker has unveiled his new single, “Try”, along with an official music video to accompany the release.

“Try” is about keeping your hope alive,” he says. “It’s tougher some days than others to see an end to the means, but you have to commit to putting in your best efforts, whether it’s for yourself or someone else.”

Recorded and co-written with producer Jonathan Nathaniel, the song took shape via a couple of Zooms together, constructed from the ground up with the primary melody based on an acoustic guitar riff Max brought into the session.

“We wanted the song to have a fun and airy vibe while reinforcing the message behind it,” says Max.

The video for “Try” opens with Max silhouetted against a solid red background before revealing himself, looking sharp in a tailored Hugo Boss suit. Against the simple, classic background, his moves are smooth and calculated, allowing the lyrics of the song to shine.

Check out the video below, and find out more about Max via our mini-interview.

Hi Max! 2021 was a big year for your music. You released an EP and had a hit radio single and tons of other exposure. What was the best thing about 2021 when it came to your music?

The best thing about 2021 was how much traction Good Time landed, especially on radio, and how it has resonated with my fans. It landed Top 10 at Canadian radio and I hit high on the Shazam charts- that was a first for me. Good Time is upbeat on purpose and, even though it depicts an ending to a relationship, it also gives thanks to a relationship had, and to be able to smile back on as agood experience. I’m pretty stoked that I was able to give such a positive message with this song especially and while it was spinning hard throughout the summer.

Tell us about your new single and video, “Try”. Who came up with the concept for the video? It’s simple but so slick at the same time! Any behind-the-scenes stories you would like to share?

“Try” emphasizes hope even admidst troubled times. I wrote the song for listeners to keep a positive outlook on life, despite the hardships we all go through. It’s a song about valuing friends, family, and the people you deeply love, and to come to the table to offer forgiveness and a peace offering.
The song was written at a time when the world was feeling intensely crappy – climate change disasters, the pandemic, not being able to see friends, not being able to perform live…and the list goes on. As sadly frustrated as I was about the world at the time I wrote the song, I decided to keep the vibe airy and anthemic, to emphasize hope and a way out of the darkness we’ve been dealing with.

The music video for “Try” was a blast to film! I had videographer Matt Barnett on board for this one, and he knocked it out of the park. I feel that it was a very mutual idea we both had. My vision was to be styled in a blue HUGO suit and to focus on fabric, close ups, slow movement (grateful for the partnership that I have with HUGO BOSS) with a contrasting fuschia/red backdrop. Matt had surfaced the idea of having me on a swivel that showcased a 360 degree of my body in movement, along with some gutsy physical expressions. It was such a simple concept, but the video popped with motion, colour, and focus. It really all came to life on shoot day, although I was dizzy after spinning all day long on the swivel haha! No vertigo though! I do have to say that the film crew was also incredibly kind, and I had my stylist Jasen Fischer who styled my makeup and hair and of course my stylist. It was really a dream team! I felt like a rock star!

I’m feeling really good about 2022! Despite getting off to a real rocky start (having my Instagram account hacked for 10 days – that’s a story in itself), I got past that and I’m more eager than ever to put out some great content for the fans – I love making people smile-it’s really about the human connection, even if it’s pretty much still virtual. I’ve been making and editing some skits. Just thought it would be useful to incorporate my theatre and performance knowledge (high school of the arts, and currently at uni in theatre/performance). I think a lot of my fan base is starting to latch on to my artistry in a new way – they’re diggin’ my humour and various characters, like my alter-ego producer character MCP!

Honestly, my other immediate goals are to get out there again with live shows. One show just got cancelled cause of COVID, and I’m holding my breath on whether another show scheduled for end of February will happen. So now I’m trying my best to reschedule some shows. I am also always writing and producing some demo pieces and hooking up with my mainstay producers to keep at a second project, it’s all good considering what artists are still up against these days. Just staying positive and hopeful that soon enough I’ll be kicking it on stage again! To think that I was about to do a radio tour in April 2020…and here we are, two years later, still waiting to do any sort of tour…that would be a significant next step, if we can get out of this pandemic. The goal is to keep on making music and putting it in front of as many people as possible, much like the success of Good Time. I would really like to travel for music, hopefully, in some way shape of form, 2022 will be a silver lining.

If you could record a duet with any Canadian artist, who would it be?

I’ve had multiple answers for this one over the past couple years. I think a duet with Alessia Cara would be incredible. She’s been releasing some really pure, honest and heartfelt music recently, and I really gel with her tune “Box in the Ocean.” Her music makes me feel like I wasn’t the only one holding in so many emotions due to this pandemic and everything I’m juggling with uni and my music career at the same time, and tech fatigued. I would love to write with Alessia.

Remember to smile and be kind every day and have FUN. You always have what it takes to achieve your goals. If I can do it, you can too 🙂