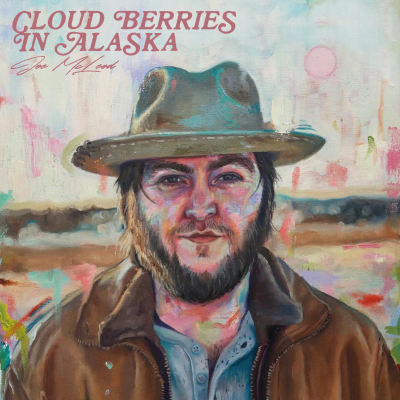 Canadian singer-songwriter and multi-instrumentalist, Joe McLeod has unveiled his debut album, Cloud Berries In Alaska, with production by members of Canadian indie-rock group The Elwins.

In advance of the album release, he shared two singles, “Smile Always” and “Something Inside”, and if they are any indication of what’s to come on the album, we’re all in for a treat.

On Cloud Berries In Alaska, he zones in on real human emotion, cutting away the excess and exploring the human experience with sweeping musical movements, driving rhythm and rich harmony.

“A cloudberry is native to arctic and subarctic temperature zones like Alaska, and has the ability to survive and thrive in extremely intense conditions. This really became the emotion attached to this album written mostly during the pandemic,” McLeod explains. “I was simultaneously dealing with the death of my father and the budding of a new relationship. Cloud Berries In Alaska represents the collection of emotions I felt during this period of time: loss, sadness, love and hope. I began to think of this story as a cloudberry, somehow surviving and thriving during these extreme conditions.” He reflects, “This is a real time capsule of those moments in my life where by some miracle I was able to keep my head on straight.”

Check out the album below, and find out more about Joe via our Five Questions With segment.

My name is Joe McLeod, I am a singer-songwriter, producer, and multi-instrumentalist originally from Keswick, Ontario but now based in Toronto.

My music and writing style have a few rotating elements. First and foremost is authenticity. I am fortunate enough to write music for other artists and other bands, but when it comes to the music I release under my name, it has to be real to me. I try to tell stories and life experiences in a way that people can relate themselves to. I try to think of my writing as an expression of my inner dialogue and thought process about life and the ups and downs within it. I combine elements of folk, pop, rock, and Americana to create a cool fusion of poetry, rhythm, and harmony!

I spent the first 6-7 months of the pandemic building a functioning music studio in my hometown of Keswick. This was probably less creative than I wanted it to be given the amount of hours doing drywall, shingles, and painting BUT the outcome has allowed me to get back into the creative swing. Once this studio was done, I recorded 5 songs in 5 days and put them out under an alias, purely to get the creative juices flowing without the pressure of promotion. Once that was released, I then proceeded to start recording the bed tracks for what has become my debut album “Cloud Berries In Alaska” out on January 28, 2022. From January of 2021 onwards, this album & everything that goes along with it has been my sole creative focus.

I would suggest listening to my newest song “Something Inside Of Me”, which also happens to be the 2nd single off the record! There is a fun music video that we filmed to go along with it that I’d also suggest taking a peek at! It’s a real earworm and I think it gives a good example of my style of writing. https://www.youtube.com/watch?v=UF06VASQaIA&feature=youtu.be

At this moment in time my favorite Canadian bands or artists would have to include; Dan Mangan, Tim Baker, William Prince, The RAA, iskwē, and Charlotte Cardin. I could make a HUGE list but those folks are definitely near the top this year.