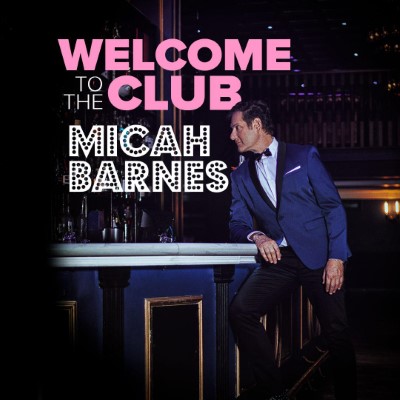 JUNO nominated Canadian jazz vocalist Micah Barnes has set the scene for a swingin’ Saturday night with the new single, “Welcome to the Club”.

If all that sounds like a great escape from our long-running pandemic reality, it’s exactly what Barnes wants to provide with the latest single from his iTunes Canada #1 Jazz album Vegas Breeze.

“Since its release, the Vegas Breeze album has become a listener favourite on Jazz stations around the world,” says the Canadian vocal jazz virtuoso. “We thought we would be touring Europe with this album at this time. Since the whole world is grounded (again) for the moment, I felt releasing a new track and video would be the best way to bring more music to our fans around the world!”

The intriguingly shape-shifting lead track on Vegas Breeze, “Welcome to the Club” is more than an enticing invitation, it’s an inspired mash-up of two different, little-known songs with the same title. Nat King Cole recorded and released his “Welcome to the Club” in 1959 and Mel Tormé wrote, recorded, and released his in 1961. Discovering and combining the two songs exemplifies the approach Barnes took to create his latest and third full-length solo project.

“Our focus on Vegas Breeze was to find unusual songs from the showroom era and choose material from beyond the regular Rat Pack repertoire,” he explains. “That led to a really fun period of research, discovery and exploration for me and the band.”

“You know when you are kids, and you spend time together in each other’s houses a whole bunch? In fact, it was while playing records in the basement of a friend’s house I came across a Nat King Cole song that seared itself into my memory,” recalls Barns. “The melody was bluesy and swaggering. The lyrics are smart and sexy. The arrangement played by Count Basie’s band – so fun and swinging!”

Following up three consecutive #1 singles on the iTunes Canadian Jazz charts, “Welcome to the Club” conjures up images of a swanky Vegas showroom in the ‘50s or ‘60s with a velvet-voiced vocalist holding court on the stage. Back then, if you couldn’t get to Vegas for the full, live experience, you could often see the singing stars of the era on your TV.

“When I was a kid, the legendary Vegas performers such as Louis Armstrong, Pearl Bailey, Dean Martin, Peggy Lee and Steve & Eddie were still performing on the TV variety shows,” says Barnes. “Although I was actually never in the audience during the 50’s/60’s heyday of the showrooms I certainly fell in love with the style and the power of those musical personalities.”

For the “Welcome to the Club” video, Barnes wanted to recreate the 1960s TV variety show experience but, how to pull that off? After Barnes was forced to shelve a national tour in 2020, he and his band pivoted to perform a 14-date virtual tour “from the living room”. One of the virtual venues, London Ontario’s historic Aeolian Hall, became a favourite, and Barnes and his band were invited back to play a livestream there in the summer of 2021.

“Thanks to the excellent team at The Aeolian, we felt the footage was strong enough to offer to the public as a video,” says Barnes. “Working with my director Carlos Coronado we went about recreating an old fashioned 60’s TV look for the final product!”

Watch the video for “Welcome to the Club” below, and find out more about Micah via our mini-interview.

I’m all about singing. Started young and will grow old doing it.

Cut my teeth in the Jazz and Cabaret clubs at the piano while still a teenager in Toronto, joining the A Capella Pop band The Nylons and going around the World before settling back in Canada with a series of self-penned Jazz albums that have allowed me to work with this countries finest including Molly Johnson & Jackie Richardson.

Tell us about the making of Welcome To The Club. What started the recording of the song?

I was looking for unusual tunes that were outside the overplayed “Rat Pack” repertoire, an “Alternative Vegas Playlist” if you will. I remembered a swinging bluesy tune by Nat King Cole tune with the title “Welcome To The Club” that I’d once heard as a kid, and while trying to find it again, stumbled on a ballad with the same name- written and recorded by Mel Torme!

Amazingly both lyrics told the same story- of a sophisticated swinger welcoming a young buddy into the hard-drinking club of “losers in love”… My band and I managed to create a medley that moves through three different tempo’s – I’m particularly proud of the way it opens the Vegas Breeze album with a BANG!

You are now the DJ of your own club – what’s the sure-fire song you spin to get everyone on the dance floor?

If it’s Vegas “back in the day” then it’s either Sergio Mendes Brazil ’66 or Peggy Lee’s “Fever”! Of course, as the DJ I am probably taking cash from the casino owner to play whatever the “high rollers” want to hear on that particular night!

How much fun was it to be in The Nylons?

Um, more fun than words can describe? Singing 4-part Harmony like that was pure bliss for a singer like myself. I came up deeply entrenched in Gospel, Soul & R&B Vocal groups- so it was a dream come true. Lotta hard work though. Early mornings and late nights. NONstop meetings recording sessions and media events.

It’s a good thing I was young! I’ll always treasure the experience and be glad I got the ride the “merry go round”!

I am a Vocal, Performance, and Career Strategy Coach as my “day job” so please forgive me if I list some of my own clients. (They are indeed my favourites but that’s natural as I’m very close to their music). Monowhales for fave Alt-Rock act (Sally Shear is a bonafide Rock Star) Dustin Bird my fave up and coming Country Artist, Riverse one of the best Pop acts we have in the business (they are blowing up internationally) and of course J.P. Saxe who, (with Juno and a Grammy nod last year) will need no introduction to your readers…his songs and his integrity continue to inspire.