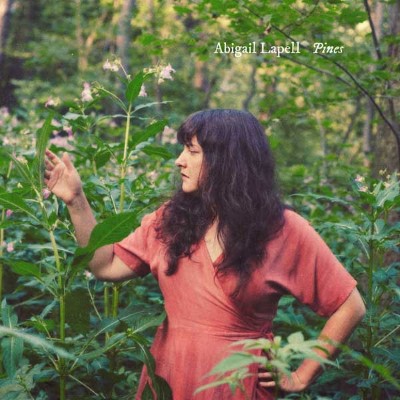 Toronto, ON-based songwriter and multi-instrumentalist Abigail Lapell offers this prompt at the end of the synesthetic piano tune “I See Music”, but the invitation could apply to her entire third album, Stolen Time. Produced by Howard Bilerman at Hotel2Tango Studio in Montreal, Stolen Time is elemental and powerfully evocative, channeling natural imagery and the revolving seasons to take a longer look over decades and generations, ultimately delivering up the present moment the way only the best music can.

Lapell recently shared, “Pines”, the evocative first single from the new album. Inspired by a songwriting residency in the Rockies, “Pines” captures the intimacy of walking alone through the woods, spellbound, surrounded by frozen mountain vistas. The track features Lapell on piano, accordion, and harmonica, with a voice like autumn smoke and a contagious melody reminiscent of Neil Young crossed with early Cat Power. Building to a bluesy harp outro, Lapell serenades the currents of electricity that seem to course through the mountains, down a raging river, whispering on the breeze and out past distant stars—all driven by the same pulse of energy that guides her footsteps, carrying secret transmissions on a frequency just out of earshot.

A theme of recovery runs through Stolen Time, with lyrics about becoming sober or coping with a partner’s sudden illness, exploring the cycle of relapse and rehabilitation. The album’s title comes from the musical term tempo rubato, which Lapell picked up while teaching herself piano. Referring to the expressive push and pull of tempo in musical phrasing, it’s also a fitting metaphor for the fragile rhythm of uncertain times, darkness hand in hand with escapism. On “Scarlet Fever”, swirling and woozy with Rachael Cardiello’s viola and Peggy Lee’s cello, Lapell recalls a relative’s tales of childhood quarantine; “Sewage” is a fever dream of a loved one recovering from surgery. “All Dressed Up”, a honeyed sweet duet with Montreal’s Chris Velan, echoes how many of us have felt these past two years while waiting to recover our lives.

By turns poetic and painterly, Stolen Time brings a live-off-the-floor, 70s folk-rock vibe and structural experimentation to songs that feel expansive in their scope—unhurried, psychedelic, and other-worldly in the vein of Gillian Welch or Karen Dalton. It also marks the meeting of two important music communities for Lapell, who spent formative years living in Montreal’s Mile End before moving back to her hometown. Toronto players include Dan Fortin (bass), Dani Nash (drums, vocals), and Christine Bougie (lap steel, guitars); and from Montreal, Katie Moore (vocals), Pietro Amato (French horn), and Ellwood Epps (trumpet).

Lapell’s band underscores and meets the power of her vocals on songs like “Ships”, a wild sax solo seemingly enticing her higher and louder to meet the crashing waves. The twangy guitar of “Stolen Time” recalls the hazy ambivalence of lazy summer days, wasting away in a state between bliss and blitz. “Old Flames”, with Lapell’s melodic fingerstyle guitar mimicking flickering embers, could be read as a bit of an answer song to Bruce Springsteen’s “I’m On Fire”.

But many of Stolen Time’s standout tracks are solo guitar or piano ballads, backed by little more than Lapell’s harmonica, antique pump organ or accordion–including “Waterfall”, with its captivating cascade of descending notes; love song closer “I Can’t Believe”, which sounds like a 1950s standard and features Nashville legend Fats Kaplin on pedal steel; and “Land Of Plenty”, which you would be forgiven for mistaking for a lost Woody Guthrie or Pete Seeger tune.