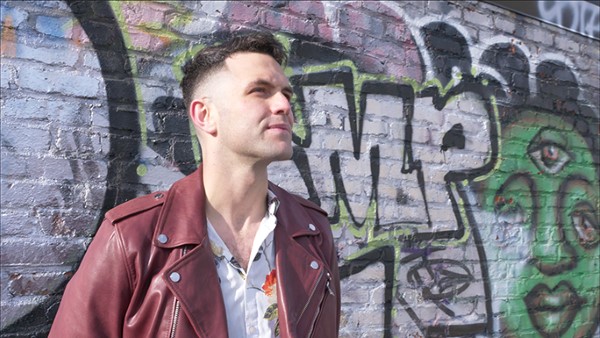 Montreal, QC-based pop artist Condor Matador, a.k.a Jeremie Legault has released his new single, “The ’90s Song”, which will be included on his upcoming album, Dirty Thirty – slated for release in June 2022.

Legault had been in a funk; it was the pandemic, which is funk-inducing for all of us, and he was also working a job he didn’t like and was just feeling blah. Working on Condor Matador was one of the few things that brought him joy and kept him sane during that time; he wrote “The ‘90s Song” when he began making steps toward feeling better and taking hold of his own destiny. The opening lyrics – “As I walked along/Hummed a ’90s song/It was Cher/Do you believe in life after love” – inspired him to apply the disco treatment to the song, because who’s more disco than the diva Cher?

“’The ’90s Song’ is a love letter to disco, written with a punk-rock sneer,” Legault says, adding that the chorus is inspired by “SOS” by ABBA. However, because “The ’90s Song” prominently features symphonic violin accents –- that violin is actually the first thing we hear as the opener – it’s impossible to not immediately think of The Verve’s 1997 hit “Bitter Sweet Symphony” as the song’s touchpoint, while the slightly sneering vocals absolutely evoke the pop-punk – Green Day, Blink-182, The Offspring – of the ’90s.

Though the song features acoustic guitar elements provided by Legault, he commissioned Marky Beats (Marc Dupre, Domeno, Jonathan Roy) to produce a disco and funk style beat to go with the music. Legault was also able to involve Andrew Wan, two-time JUNO award-winning violinist, and concertmaster of the Montreal Symphony Orchestra, in the making of the song. Meeting Wan was kismet, he shares.

“My sister-in-law, photographer Erika Rosenbaum, had just taken some headshots for Andrew, and he happened to be visiting my brother’s farm on a day when I was helping him with a few things. We connected, and he said that he’d be interested in collaborating on a song.”

Wan went to Legault’s condo and they spent a fruitful evening recording his violin parts. “He was such a good sport and a wonderful collaborator,” Legault says.

Watch the video for “The ’90s Song” below, and find out more about Condor Matador via our mini-interview.

Hello!! My name is Jeremie Legault and I perform music under the alias Condor Matador. I live in Montreal. Condor Matador used to be a duo, but now it is my solo project. First and foremost, I consider myself a songwriter. I love writing on acoustic guitar and I use music as a way of processing my emotions. Next, I would say I am a singer. While recording Dirty Thirty, my upcoming sophomore album, I’ve been stressing vocal performances. I want to embody the character that is going through the experiences laid out by the lyrics of the song. I’m also trying to sound like myself more on every song. It’s a delicate balance, but I’m having a great time trying to strike it! I like to tell people that my music is the rock ’n’ roll love child of Ed Sheeran, Blink-182, and just a little bit of Phil Collins.

Tell us about the making of “The ‘90s Song”. What started the writing of the song?

Montreal has had some pretty harsh Covid restrictions. I am really blessed to have a huge family and to have a network of friends that I really love. Not being able to see them in person was really hard on me. Concerts couldn’t happen either, so I wasn’t able to scratch my itch to perform. Finally, I was stuck in a job that I did not like. All of these factors coalesced to a point where I just didn’t feel like myself (and feeling like myself usually feels pretty good!)

Trying to get myself out of this funk, I started writing The 90’s Song. I knew I had something good when I cracked up writing the opening line “As I walked along hummed a 90’s song, it was Cher”, because I think most people would look at me and assume that I’d think the quintessential 90’s song would be Smells Like Teen Spirit, or You Oughta Know. However, I reveal I was thinking of Cher. After that, the rest of the song poured out of me. I genuinely love disco and Cher’s music, so it was natural for me to make the song a disco arrangement. I was also listening to Dua Lipa’s song Love Again a lot at the time, so I knew I wanted violins to be a big part of the track. I was lucky enough to run into Andrew Wan at my brother’s farm over summer 2021, and I knew I had to collaborate with him as I had the perfect song to work on!

You’re able to transport back to the 90s to see any band or artist live. Who is it, where, and why?

I would love to travel back in time and catch one of the Metallica and Guns N’ Roses shows (with Faith No More as openers!) in 1992. They did this big tour in support of the Black Album and Use Your Illusion 1 and 2. There’s a legendary incident that occurred in Montreal, in which Metallica frontman James Hetfield was terribly burned in a pyrotechnic accident. James had to be rushed to the hospital and Metallica’s set was cut short. Guns N’ Roses could have saved the day by coming out early, but instead they hit the stage hours late. Attendees became rioters and caused a lot of damage around the Olympic Stadium. This tour stands out in my memory for these reasons! To be clear, however, I would rather go to a show that preceded the Montreal incident as I would have loved to see both bands play full sets!

What’s the best part of living in Montreal?

I think the best part of Montreal is the mix of North American and European Cultures. By North American culture, I mean the wide diversity of people that you can run into walking down any given street. I have friends from all over the world and we all share Montreal in common. It is such a gift to be exposed to so many different people!

As for what I like about Montreal’s European heritage is Montreal’s love of beauty and the arts. This can be felt at the many festivals that are hosted in the Montreal area in the summer and tasted at its many restaurants.

I also love running on the waterfront along the Lachine Canal and St Lawrence River.

Right now I am listening to the Weeknd’s new album a lot. His previous album After Hours just blew me away, so I have been listening to his new one as I run. It is taking a little bit more time for me to really connect with it, but I have faith it’ll come with time!

I want to also mention the Dirty Nil, as I think that what they are doing by combining 80’s thrash elements with great songwriting and a punk rock attitude is incredibly inspiring. I saw them open for Against Me! At Theatre Corona a few years back, and they really blew me away live.

Finally, I have to mention how much I have enjoyed Justin Bieber’s most recent album, Justice. Peaches feels like a warm drive down a sunlit road in the ears.