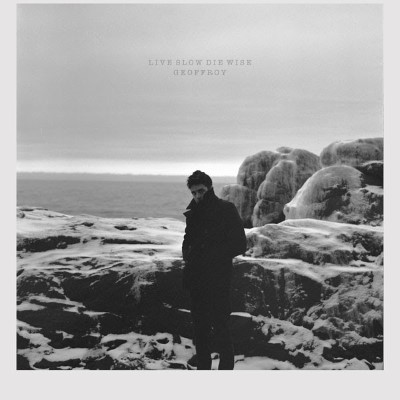 Live Slow Die Wise is a blurred photograph of a cold winter’s sunset – soft, bittersweet, nostalgic, with a low simmering warmth at its center. Best listened to with a warm cup of tea and a knitted sweater, Live Slow Die Wise primarily hangs on the soft picking of an acoustic guitar and Geoffroy’s smoldering deep voice. However, the tracks also feature bass, drums, ethereal female vocals, and even samples of birdsong and the sweet mumblings of a child. The tracks of Live Slow Die Wise have an intimate, conversational feel of Paul Simon or Jeff Buckley with lyrics that are heavily introspective. As Geoffroy shares “Live Slow Die Wise represents a specific state of mind. It’s about taking the time to live freely and consciously. It’s about being aware and embracing the ephemerality and fragility of life.”

Standout tracks on the album are “Strangers on a Train” and “Cold World”. “Strangers on a Train” has an irresistible air of intrigue, mystery, and romance while maintaining a fragile sorrow. Above a rhythmic guitar baseline, the lyrics drive the fateful ending of a relationship, but also how the pain of that ending will inevitably fall away into entropy; both parties could then meet again someday, but only see each other as strangers on a train. On this point, though, the track is appropriately bitter and optimistic.

“Cold World” starts appropriately, quite starkly, with just Geoffry’s voice and guitar, with an appeal from Geoffroy for kindness in this cold world. However, the track quickly builds on its bare bones with piano, bass, accompanying vocals, and other instruments to bring this appeal to a swelling climax as Geoffroy’s pleas become more desperate for love and humanity.