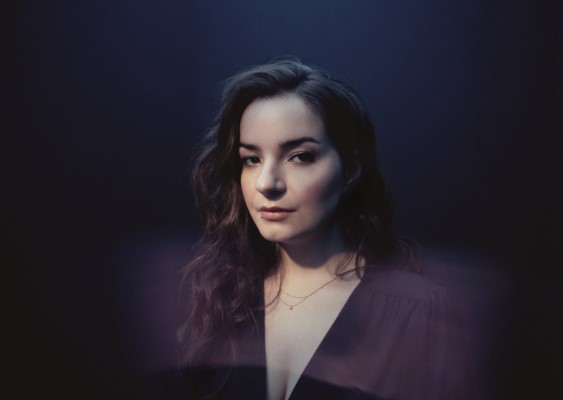 Geneviève Racette is captivating listeners yet again with her new single “Someone”, featuring one of Canada’s biggest songwriters, Dallas Green.

Racette caught the attention of Green back in 2019 when she covered one of his songs on social media and a friendship grew from there. Green invited her on stage at Oshega and then asked her to open for him in Montreal during his 2022 tour. They’re even releasing an original duet in January 2022.

“Someone” is an intimate song with a heart-aching melody and is set to feature on Racette’s third full-length release, due out in March 2022. Through her gentle vocals and captivating melodies, Racette is proving to be a rising star in the Canadian music industry.

We caught up with her to discuss her friendship with Dallas Green, her COVID creative process, and the creation of her new music.

Did you experience any challenges in your creative process when COVID hit?

I’m lucky I had a few songs written pre-pandemic. I held on to those songs for a while before I wrote new ones. I did a lot of online co-write sessions with my friends Barbra Lica and Danielle Knibbe. Other than that, the inspiration was hard to find for a really long time. My brain was busy processing what was going on.

Not to be dramatic but living alone and not being able to perform for so long has been really hard. When my producer François-Pierre Lue and I had to stop working on the record because the studio closed due to lockdown I was simply devastated. That record felt like it was the only thing I had left career-wise. It was really hard to deal with.

It still affects me today. I tend to not let myself get excited for anything anymore. I guess I’m trying to protect myself from disappointment. I won’t lie COVID has really been hard on my mental health.

You’ve talked about the importance of surrounding yourself with like-minded females in the industry. Tell us about the process of developing a team of women to help you create your upcoming album, Satellite.

Yes! Girl Power! It all came pretty naturally actually. For the longest time, I was working exclusively with men. It’s so normalized that I didn’t even realize it. From my studio band to my live band to my management, booking, etc. Nothing wrong with men but women deserve space in the industry. Once you start seeing the lack of women in the music industry it’s very apparent that it’s a problem. It really wasn’t that much of an “effort”. It’s not hard. You simply just have to want to hire women. They’re there.

What was your first impression when you started working with Dallas? Did you find that you connected right away?

We didn’t really get the chance to work together in person yet. He recorded his vocals in Toronto during the lockdown. I think it’s very generous of him to have offered to sing on my new single “Someone” and I’m so excited to release it. I’ve known about this for so long, it was hard to keep it a secret all this time!

“Someone” is a beautiful song, and it’s obvious how well your voice works with Dallas. Tell us about the writing and recording process of the single.

“Someone” is one of those songs that just poured out of me. It’s probably the most vulnerable song I’ve ever written. It’s a song about desire, temptation, seduction, and fantasy. There’s also guilt and shame that comes with it. I think sometimes life throws feelings at you and they’re meant to act as signals. I really like this song but it often brings me back to a weird place.

I totally heard Dallas’s voice when I wrote it but I was too shy to ask him to sing on it. There’s something about the melody that reminds me of City and Colour. I’m a pretty insecure person and the idea of asking one of my teenage heroes to sing on my song was a little too scary. I sent him a few demos and out of all the songs he fell in love with Someone. Dallas said he would love to sing on it if I was interested. I said yes, duh.

Tell us about the process of writing your album “Satellite” — is it a cathartic experience as a songwriter to dive into those really personal stories of love and self-reflection?

It’s literally my therapy. I wrote the majority of the record while I was going through a breakup. Many of my friends went through heartbreak at the same time. It was sad but at least we had each other. We called ourselves the Broken Heart’s Club. My apartment was the headquarters and I like to think I was the president. Twizzlers, chocolate, and video games. Luckily the club no longer exists. I actually dedicated the record to the Broken Heart’s Club in my liner notes on the vinyl and CD.

You must be thrilled to be getting back out onto the road and touring again. What is the atmosphere like at a Geneviève Racette show, for those who’ve never been?

Honestly, I haven’t played a show in so long I have to remember that myself, haha! I like to think that my shows are a safe-space for everyone. My music is not the most upbeat so you probably won’t dance the night away but you will most likely feel things. You might think of someone you love or loved. You might cry a little too and that’s ok.

Is there anything else, besides an album and live performances, that you hope to accomplish professionally in 2022?

I would love to go back to the Banff Centre for Arts and Creativity to write some new songs. I’m putting it in the universe.