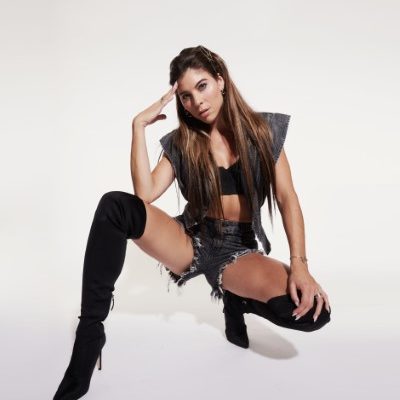 Music has been a part of Doucette’s life since childhood when she began singing and writing songs at six years old. Since then, she’s continued to perform and was signed in 2020 to MDC Music. She began making a name for herself in Toronto’s music scene, performing at various live-streamed performances, drive-in concerts, and digital showcases during the pandemic.

She’s released popular singles like “Craved” and “Dead in The Water” and was even featured as an artist and co-writer on Soundhaven’s “Sugar Free.”

Now Doucette is ready to showcase more of her sound with the release of Run With Me, and we caught up with her to hear all about it.

When did you decide music was going to be more than a childhood hobby and instead something you wanted to pursue as a career?

I have known my whole life. It was just until I found the courage and the perfect team that made it a given path.

Did you know from the beginning what style of music you wanted to create, or did you have to learn over time before you signed with MDC?

Since I enjoy all sorts of music and since my father has a rock background I have found it hard to nail down a genre. However, knowing I love writing upbeat dance music made it easy to define myself as a POP artist. Fun thing is pop music is so multi-dimensional now.

What has your experience been like with the Toronto music scene?

Well, it’s mostly been during Covid, so it’s been very different. I’m proud of the stage time I have managed to get and the releases through this past year. I just want the world to open up. We all do. Artists are hardcore.

Congratulations on Run With Me! How does it feel to finally have a debut EP?

Well, I can’t wait to show people a collection of songs all at once!! These songs have been years in the making and I think really show who I am as an artist.

With this EP, each song is so personal and authentic. How does it feel to have fans be a part of your experiences and listen to your growth as an artist?

It’s really fulfilling. I make music to connect with and inspire people. It’s my yearning to spread positivity while I face my fears of the stage each time I step up there.

What’s your favourite track off the EP, the one that you can’t wait for your fans to hear?