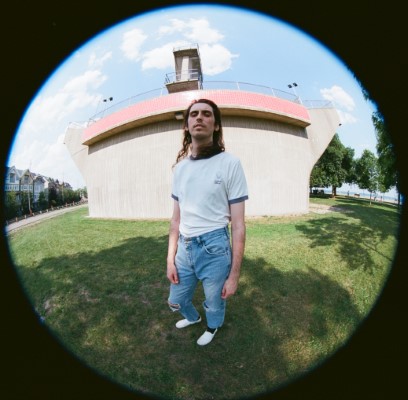 As so many of us are, Whitby, Ontario’s Chastity is dreaming of days where he can hit the road again! Having already performed across North America as well as parts of the UK and Europe, read on to find out where else he has lofty goals of visiting, including to perform from his third album, Suffer Summer.

Fans have already been treated to your two previous albums, Death Lust (2018) and Home Made Satan (2019); what was the biggest difference in the creative process of this third release, Suffer Summer?

I feel like the biggest difference was the amount of time and the absence of pressure. I finished recording 16 songs in the summer of 2021, then we went into another lockdown, and I kept going and ended up recording eight more. I’m weirdly grateful to have had the time to challenge myself.

What are the most important takeaways or lessons you want fans to get from the new album?

I’m not totally sure honestly. It’s an album about happiness and how short-lived it always seems. I’m trying to be more content with feeling slightly lower than content.

Fellow Canadian artist Dallas Green appears on the album for “Vicious Circle”; how did that collaboration come about? What was the coolest part of that experience?

Ah, everything was so cool about it. I was pacing around the apartment getting ready to ask if he’d sing on the song with me. He said ‘Of course pal!’, and I thought, I’ll believe it when it happens. Not because he’s unreliable, because he isn’t, but just because he’s king. We were recording it on March 22nd, 2021 and I was counting down the days. He brought friggin’ George Pettit with him, and he sang amazing harmonies too. It was all so cool and I’m extremely grateful for the day.

A lot of artists are happy with the chance to tour throughout North America alone, but you’ve expanded your reach to the UK and Europe as well. What’s the biggest difference in fans throughout the different parts of the world that you’ve played? Where else do you still want to play?

I feel really lucky to have played all these places. When I started Chastity I wrote down a goal that I wanted to release one full-length album and I wanted to tour England. It’s surreal to have been able to make it there. I think people in England really love music and that’s why I dreamt of going there. Germany really loves distortion I’ve found and they are brutally honest to people there, like, “Why don’t your new songs have distortion on them?” or “I liked this song but not this song”.

I also really want to play in Russia…for some reason, they’re Chastity’s 3rd most listened-to country on Apple Music! I want to make merch with those Russian letters on them, and visit Lenin’s grave.

Ah, they seem to always be changing now. Three weeks ago, we were playing shows in the US and now we’re in another lockdown. When smarter people than me say that it’s safe, then I will blindly follow, and hope to play as many shows as I can bug my booking agents to book. I think it would be cool to do a ‘Suffer Summer’ tour if there’s a decent season for it.