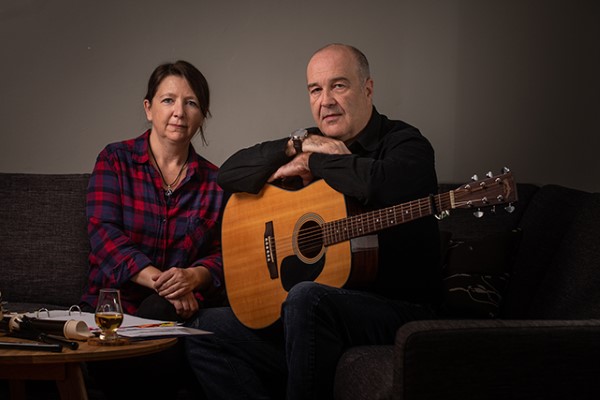 Canadian duo, The Co-Conspirators have unveiled their single, “The Lonesome Death of Elijah McClain” from their new album, The Unreliable Narrators.

With 11 of the 12 songs on The Unreliable Narrators written by the duo’s multi-instrumentalist, vocalist, and principal songwriter, Will Richards, they are all brought to full fruition with vocalist/multi-instrumentalist Katherine Simons’ voice intertwining with Richards’ — like a pilot and copilot deftly navigating over a varied terrain.

This notion is exemplified throughout the sonic journey taken on the new album as it follows two key characters who are attracted (“Walk Me Home Tonight”), travel together (“Howlin’ at the Moon”, “The Only Road Through Town”), witness and experience hardships and injustices (“Bella Ciao”, “Young Billy”, “Do You See Me?”), come apart and together (“Friends of Mine”, “Happier”), and eventually become a memory (“History Lesson Part III”).

The other real-life observance on the album is ripped straight from the headlines; through the retelling of the 2019 tragic death of a young black man at the hands of police and paramedics in Colorado, “The Lonesome Death of Elijah McClain” strikes at the heart of our most sharply drawn social divides along racial lines. McClain was walking home with an iced tea for his brother and had committed no crime. Spotted and tackled by police, he was put in a carotid hold cutting off his oxygen and was injected with ketamine. McClain suffered a heart attack and later died in hospital. An autopsy documented extensive bruising and revealed the excessive level of brutality he suffered during his arrest.

‘Somebody’s son, one hundred thirty pounds. Three policemen crushed him to the ground.’

“The tragedy of it is unbearable,” Richards notes. “It took over two years of relentless social pressure to bring charges against the officers — and his is just one of countless stories of police violence against visible minorities.”

Check out “The Lonesome Death of Elijah McClain” below, and stay up to date with The Co-Conspirators via their socials.