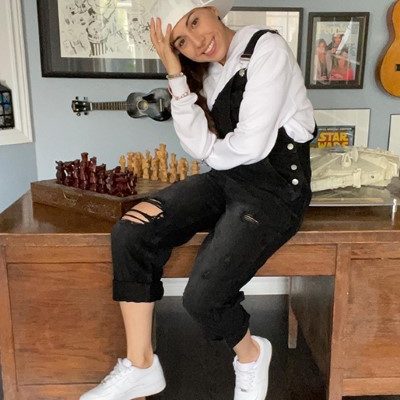 Canadian pop artist Ana Pac has unveiled her third single, “Blast Off (Light Years and Beyond)”, which follows previous releases “Down In My Whip” and “This Is…”.

“‘Blast Off (Light Years and Beyond)’ is about now understanding all the love songs ever written,” Pac shares. “It’s about the word ‘love’ not being strong enough to describe what you are feeling.”

In addition to being about finding that special person who changes everything you ever thought love could be, it’s also quickly turning into a LGBTQIA+ anthem on TikTok thanks to her tribute to her fiancée Jo; the two met by way of TikTok’s algorithm, and they now have a large following as a popular couple on the app.

“Blast Off (Light Years and Beyond)” prepares for take-off with a wah-wah bass tone evoking a spaceship’s time warp — an appropriate opening for a song with such a distinct late ’80s/early-‘90s pop sensibility. The Montreal-born, Toronto-based artist’s vocals are crystalline, and infused with a sincere, energetic sweetness reminiscent of early-career Janet Jackson, Paula Abdul, or Shanice’s unforgettable 1990 crush ballad “I Love Your Smile.” The vocals, along with playful lyrics about a romantic space odyssey, take center stage against a backdrop of clean beats and simple, well-placed harmonies.

Check out “Blast Off (Light Years and Beyond)” below, and find out more about Ana via our mini-interview.

I’m Ana Pac! An artist originally from Montreal now relocated in Toronto. If you have a keen eye, you may have caught me dancing and acting in various tv shows and movies. My passions are clear – singing, tap dancing, hip hop dancing, and acting – not always in that order of importance. But one thing that remains consistent about me is my drive to perform on stage. It is by far the place I feel most alive. I may look calm, cool, and collected from the outside but once you get to know me you will find a hyper goofball that can’t stop laughing. I play the piano and I’m currently teaching myself to play the guitar and ukulele. My goal is a simple one: Use my passion and artistic talent to remind people that they are powerful forces of nature capable of achieving whatever their heart desires.

Tell us about the making of “Blast Off”. Did you think it was too personal to make the song public?

Blast Off is very close to my heart. It’s about my fiancée. One day we were talking about how saying “I love you” just wasn’t cutting it anymore because what we feel for each other is so much stronger. We came up with our own little saying by merging my love for Disney and her love for sci-fi (Toy Story & Star Trek) and “I love you light years and beyond” came to be. Our little message for each other is what set off the idea for “Blast Off”. While writing “Blast off” I definitely wanted to get vulnerable. It’s incredibly personal for me… However, it’s the personal stuff that makes the most impact on me and hopefully on my listeners as well. I also love that everyone has their own experiences and can give it the meaning that applies to them. “Blast Off” is my love story but everyone has a story that it can speak to.

You and Jo are pretty big on TikTok – what do you love as about the platform?

There are no rules limiting your creativity on Tiktok. You want to be real and just be yourself, go ahead and do that. You wanna switch it up and create a skit and become a character you can do that too. You want to bake, dance, sing, do poetry, teach, make origami whatever your soul desires to create, you can create it and there will be people interested in what you are posting. Not to mention… I believe Tiktok is secretly a dating app lol I mean, I did find my future wife on there 🙂

Besides Jo, you can blast off to the moon with one other person – who are you choosing and why?

Justin Bieber! I’ve been a Belieber since day one. His creativity is more than 1 dimensional. He makes sure that he is part of the entire process, from the lyrics to the melody to the production as well as the visuals and performances. He’s got quite the level of experience, definitely a brain I’d like to pick.