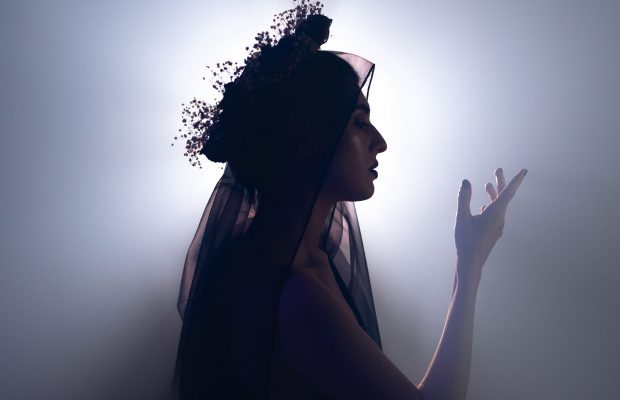 When you hear a title such as “Goddess of the Dawn”, you probably picture a beautiful morning scene with the golden light of the sun peeking out from behind a hill, but this music is very dark. That morning scene is a resolution, and the story Aileé is telling is what happens before dawn. As human beings, the greatest obstacle we are constantly battling is within ourselves. We are constantly fighting our darkness, our insecurities, and our self-doubt; constantly holding ourselves back. This piece is about owning all parts of who you are and stepping into your power. Not only recognizing you have greatness within you but trusting that you are capable of amazing things.

“This release represents the shift that occurred in me when I started to firmly believe in myself and recognize what I was capable of,” Aileé shares. “This piece is about owning all parts of who you are and stepping into your power as a woman. It’s about overcoming your inner battles.”

Stylistically, this song was inspired by soundtracks. Aileé had been working on a music commission for an audio play where the client had asked for eerie, ominous music to accompany horror and action scenes. At the same time, she had been experimenting with new sample libraries and production techniques to create ghostly atmospheres and raw textures. Written, recorded, produced, and mixed by Aileé Zaga and mastered by Chris “Hollywood” Holmes (The Matrix, Korn, Katy Perry), the instrumental doom metal track features ethereal vocal soundscapes, atmospheric drone layers, slow, heavy guitars, violins, and a jarring electric cello.

The name of the song was inspired by something Aileé read while browsing about mythology. She read of an ancient civilization that referred to the planet Venus as “The Goddess of the Dawn” and she was immediately inspired by the mental imagery of those words.

“I thought that was an incredible name for a song, but especially for my first release.” She continues. “It carries a lot of power and symbolism. It paints a picture of feminine strength and victory.”

Check out the single below, and find out more about Aileé Zaga via our Five Questions With segment.

Hi, my name is Aileé Zaga. I’m an independent artist and music producer based in British Columbia. I’m originally from México City but have been living in Canada since 2010. My music is influenced by a wide spectrum of genres, ranging from classical music and various sub-genres of rock and metal to experimental electronic music. I’m inspired by artists such as Agnes Obel, Björk, Chelsea Wolfe, Evanescence, Massive Attack, Radiohead, Smashing Pumpkins, and Zola Jesus. I am also a content creator on YouTube, where I create music production tutorials and share the behind the scenes of my work.

I started my musical journey as a teen, playing in rock bands. After high school, I started studying classical voice, and during college, I was introduced to the world of electronic music. All those experiences amalgamated into what my music is today. I usually create industrial, techno, and glitch-inspired beats, enveloped in ethereal soundscapes. I like to juxtapose heavy guitar textures with my voice, and I often include strings. When it comes to lyrics, I usually write about life, death, love (mostly unrequited LOL), my experiences as a woman, and occasionally, stories from my imagination.

I started my YouTube channel in February 2020, just before the pandemic began, and it became such a blessing during that year. Creating videos for myself and for other people kept me sane and gave me a sense of purpose and accomplishment. I have also been experimenting a little bit with photography, and of course, writing and making music.

At the moment, I would say “Goddess of the Dawn”. That track is a good representation of the general vibe of my music and art, and it is a level up from my previous work.

Here’s an assortment of independent and mainstream Canadian artists whose music I enjoy or who have inspired me: