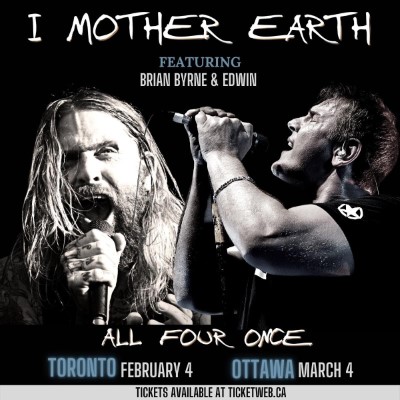 The Phoenix Concert Theatre in Toronto is excited to announce that it will play host to the first-ever appearance by I Mother Earth featuring both vocalists Edwin and Brian Byrne on Friday, February 4, 2022. The Multi-Platinum artists will perform material from their four major releases: Dig (1993), Scenery and Fish (1996), Blue Green Orange (1999), and The Quicksilver Meat Dream (2003) featuring top ten singles “One More Astronaut”, “Rain will Fall”, “Levitate”, “Summertime in the Void”, “Another Sunday”, and many more. The highly anticipated shows will be filmed and recorded for a special, future release. IME band will then take the show down the road for one additional stop at The Bronson Music Theatre on March 4, 2022.

I Mother Earth has amassed a loyal following over the years for their musicianship and unique feel of founding members, brothers Jag and Christian Tanna. Says Christian,

“When our first album Dig came out 28 years ago, we thought we had an idea of where we were headed and what we hoped to accomplish. In the early days we just wanted our music to be heard and to get out there in the world and play it for everyone…and that we did. However, we had no idea how real the relationships would become with so many of you. All the support we have had through the years from fans, friends and family has sustained us. Dig, Scenery and Fish, Blue Green Orange, The Quicksilver Meat Dream and several single releases have all been important snapshots of our lives at those times and allowed us to share some amazing moments. Our supporters have been there for us when we were low and kept us honest when things were rolling. Through these last couple of difficult years for all of us, it has been challenging to really connect with each other. We thought doing these shows could be something special, where we could thank everyone who has been there along the way. – Love, Your Mothers”