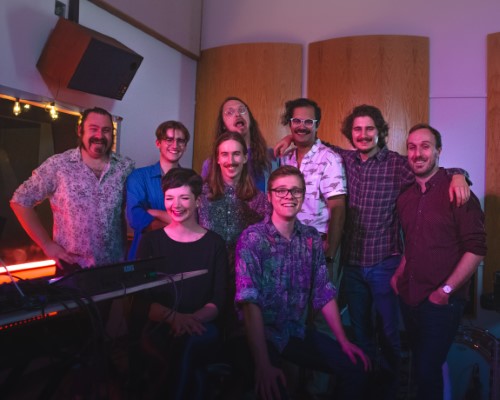 Award-winning Canadian Psychedelic-Jazz group Apollo Suns have just released their third EP A Relationship of Force on November 26, 2021. The two-time Western Canadian Music Award-winning ensemble is made up of nine expertly trained artists who aim to both complement and advance their genre. Through their unique method of blending classic Jazz melodies with newer, contemporary sounds, Apollo Suns are establishing their distinctive Jazz voice as a diverse group, which prominently features BIPOC, non-binary and queer artists. Both of their debut and sophomore EP’s spent time in the top 20 on the Canadian Campus Radio charts, and the group has toured extensively across the country, picking up numerous new fans along the way. With psychedelic and rock elements blended with classical Jazz, the Apollo Suns are creating a musical style fit for all music lovers.

Apollo Suns’ third EP, “A Relationship of Force”, was largely written while the band was touring Western Canada – the region that is home to their largest fan base. Born from watching the powerful force of a waterfall while hiking in British Columbia, the group decided to call their new project “A Relationship of Force”, citing that “you impact the world around you with your space, and that all relationships have a force”. Expertly created with each member bringing their own unique experiences and song ideas to group-focused workshops and ‘jam sessions’, the Apollo Suns ‘no-wrong-answers’ and completely open artistic approach encouraged each member to contribute to each track. Ed Durocher of Apollo Suns notes: “We want the album to represent moments of life; some of which are more aggressive, quiet and soft, adventurous, or hopeful.

We want to embrace the conceptual side of music to show that all these individual tracks are just expressions of all these moments in life.”

Produced by Keith Price and fully composed by the nine-piece band, “A Relationship of Force” is Apollo Suns first release with their record label, Color Red. With plans to step into NO FUN Studios in Winnipeg, MB with Juno award-winning producer Ben Kaplan to work on their next album in 2022 preceded by a short Western-Canadian tour, Apollo Suns show no sign of slowing down.

The first song on the EP, “Silver Gloves”, is a triumphant kick-off to the project supported by a funky, high-energy rhythm. Listeners can hear every member of the band make themselves known on the opening track as together they expertly walk the line of well-explored elements of classic jazz melodies and more modern elements. “Silver Gloves” is followed by “Lake Country” – a musical love letter from the group of prairie musicians to British Columbia. As the band considers Canada’s most western province to be the one that has embraced them the most aside from their home province of Manitoba, the song stems from a simple 4-note melody and transforms into a vibrant depiction of the warmth, beauty, and magnificence that they experienced first-hand in their ‘second home’. “Lake Country” is an ode of thankfulness to the kindness of the province.

The album also features, “Rosie”, – a mid-tempo, alternative jazz track that was written following the birth of group-member Ed Durocher’s son. With its airy melody, “Rosie” balances the common feelings of hesitations, sensitivity, and confidence that come along with the experience of being a new parent. Ed describes the hook of the song as hopeful – ” hopeful that I would be a good parent, that he would be a good person, [and] that everything would be alright”. Ending with a funky, full-bodied, bombastic sound, “Rosie” also captures the craziness and chaos of being a new parent and musically represents anticipation-filled hope for the future when entering a new chapter in one’s life.

Apollo Suns are continuing to make their mark through the release of their new EP “A Relationship of Force”, as a young group of artists in an often-considered older genre. Through careful consideration of honouring classic Jazz artists and history, Apollo Suns are paving their own path in the world of contemporary Psychedelic Jazz/Rock. A collection of snapshots from their individually unique lives and experiences, the project prompts listeners, just as it did the group, to consider the varying degrees of force present in each of their lives, how individual experiences are all shaped by the life and energy around us.