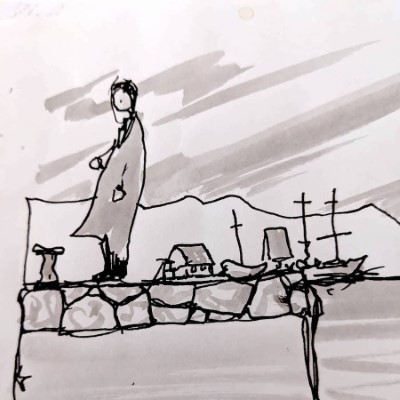 Prolific Canadian troubadour Eamon McGrath will release a new full-length album, Bells of Hope, on February 25, 2022, via Saved By Vinyl. Bells of Hope is his most exploratory, reverential, and optimistic LP to date. This year, McGrath performed over 70 shows across Canada. He has resumed his national tour with an additional 22 dates in Ontario, Quebec, Alberta and British Columbia up until his album release. In the spring, he will take Bells of Hope live across Europe.

In June 2021, McGrath hit the road after a long and silent pause. His band, consisting of bass player Tavo Diez de Bonilla and drummer Adam Balsam, played shows across Ontario in the summer and fall. The band made plans to visit Andy Magoffin’s admired House of Miracles studio to record select songs from their dynamic live show to release in time for the upcoming touring, but Balsam’s life was cut short on October 27, 2021. In honour and loving memory of their bandmate, McGrath and Diez de Bonilla covered “Bobcaygeon” by The Tragically Hip, a wild reinterpretation of which was a staple track from their live show.

The importance of “Bobcaygeon” for McGrath doesn’t end there.

“I was playing in Windsor at the beginning of the summer,” he recalls. “I was doing a house concert and covering ‘Bobcaygeon,’ my favourite Tragically Hip song, during a thunderstorm. As lightning raged outside, the power blacked out right as I started, and the minute I finished, as if on cue, the power came back on. A few weeks later, I was playing in Edmonton, during another thunderstorm, and while I was playing ‘Bobcaygeon’ lightning struck the venue. I took those incidents as some pretty powerful omens. Coupled with Adam’s heartbreaking passing, ‘Bobcaygeon’ has become a very significant song for me, and I hope through this music I make peace with its ghosts.”

In these trying times, we could all use a little hope. Continuing on a path first forged by 2018’s critically acclaimed Tantramar album and even more lauded follow-up Guts in 2019, Eamon McGrath unveils Bells of Hope, the third in a trilogy of releases defined by an ever-evolving and maturing sound by the road-hardened, working-class Canadian musician.
McGrath also shines a light on some of his most treasured relationships built from a decade spent on the road. Some of Canada’s most glowing talents collaborated with McGrath on Bells of Hope, including Julie Doiron, Miesha Louie, and Joyful Joyful’s Cormac Culkeen. In this digital world, Eamon McGrath represents the most analog form of artistry. Within his ‘never-ending’ tour, McGrath has also created a record meant to be heard front to back in one setting: a classic album in a world of disposable singles.