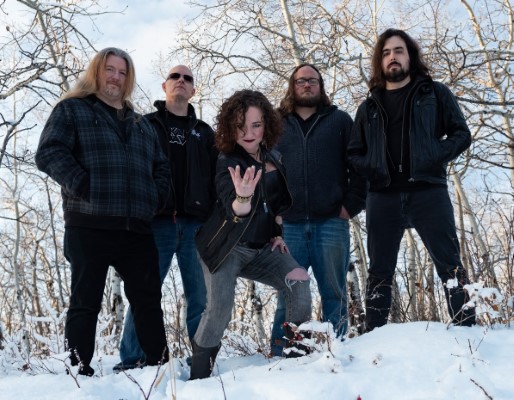 Canada’s Caveat has a new album coming out early next year, the first since Consummation which came out in 2016.

The Calgary-based band has been around for close to two decades and prides itself on being an experimental band that would essentially operate on having no genre restrictions when it came to songwriting. That philosophy is present to this day, especially in the new album Alchemy when comparing songs such as the first single “Infinite” to “Until Dawn”, which sound like two completely different bands and genres.

“Infinite” was the first song written for this album and is by far the heaviest song with an almost Gojira feel at times. The lyrics explore peeling away and coming to terms with our own fears and how fear motivates so much of our human lives, with lines like “We feed upon the will of what grows in shadows”. The band explains in further detail:

“The first and heaviest song written for the new album, it is a full-on ripper from start to finish showcasing frantic vocal trade-offs between Amanda and Greg throughout the song, blistering guitar, and bass work, with Casey’s relentless drumming giving the listener a fist-pumping, hand banging hell of a good time. This song promises to inspire mosh pits and sore necks alike when we bring it to the live stage with a frenzy of top-notch heavy fucking metal at its finest”

Having worked together for so long, the music comes organically to Caveat, according to them, they write music until they feel like we have a cohesive collection of songs that work well together and then assemble that into a cohesive listening experience. Even after all this time together, they still enjoy writing and playing together, so new music is always on the horizon.

Caveat is both experimental and engaging and recommended for fans of Meshuggah, Opeth, and Cynic. Alchemy will be available on February 11, 2022.