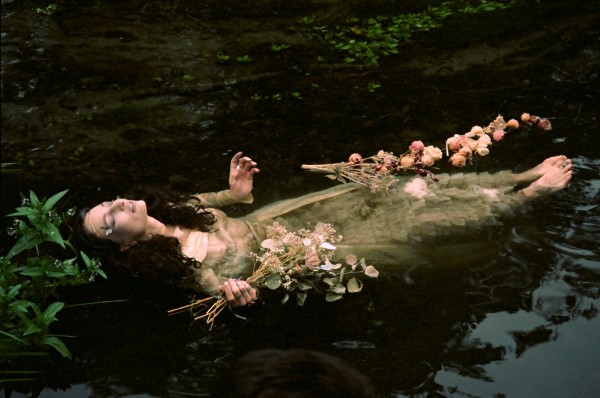 Calgary-based art-pop artist Selci released their latest single “Ghost,” mixed by Sylvia Massy, with a stunning visual accompaniment, directed by the artist herself. “Ghost” offers a first taste into what will be a fruitful 2022, as Selci puts the finishing touches on a two-part album project, details of which will be announced next month.

“it’s about being ghosted – literally and figuratively. The first verse is about the elusiveness of truth. This feels augmented in our current reality with the lack of trustworthy sources and the influx of political conspiracies. The second is about being ghosted by a love interest and washing it away with liquor. The third is an outcry – it gives me the feeling of falling to my knees in surrender to the things that I cannot control in this life. This song is very much a response to the political climate of the past two years. It takes the laments of modern life and compares them to ghosts.”

For Selci, the pairing of music to the visual, is a natural extension of expression. “The video for ‘Ghost’ recreates famous 19th-century paintings of mythological women,” they noted. “In contemporary styling we recreated Charles Mengin’s ‘Sappho’, Waterhouse’s ‘Echo and Narcissus’, and Mallais’ ‘Ophelia’. Contemporary dancers dance like ghosts in front of giant human-like statues in Calgary, known as ‘The Brotherhood of Mankind’. In its time, it was created as a celebration of colonization, framing it as a gift to the rest of the world – a dated and simply incorrect view of colonization, and continued harm it has brought to Indiegneous peoples.

Continuing with that theme, the scenes of women dancing in red dresses is an intended nod of awareness to the inquiry into Missing and Murdered Indigenous Women in Canada. The final scene – featuring a woman, apple in hand, being clutched by another hand from below, is a commentary on the Garden of Eden, and forced assimilation into the Catholic Church.”

“Ghost” follows Selci’s September single “Type and Send.” The two tracks show the versatility and dynamic range of Selci’s sonic palette. And with a two-part album set for 2022, the Selci is ready to take on the world.