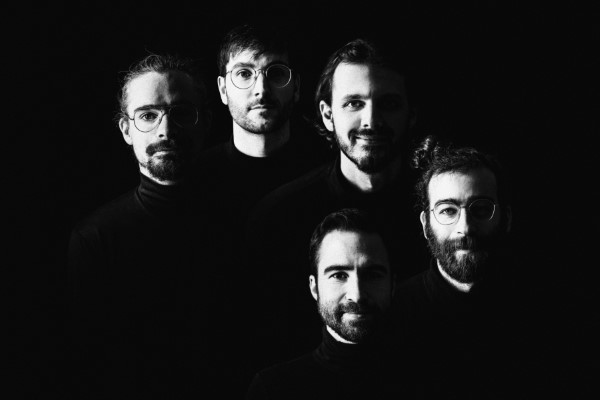 Montreal, QC-based jazz quintet, L’abîme unveiled their self-titled album back in April, and have now announced 2 upcoming shows. They will be rois-Rivières (le 507) on December 16, anda in Sherbrooke (La Petite Boîte Noire) on December 17.

L’abîme is a new band from Montreal influenced by jazz, progressive rock, and contemporary classical. The quintet emerges from the Trio Jonathan Turgeon, a recipient of the Stingray Rising Star award at the 2018 Montreal International Jazz Festival.

Pianist Jonathan Turgeon’s compelling compositions are bolstered by strong arrangements devised by the whole group. The project is a particularly compelling showcase for the group’s woodwind players, who explore a wide range of textures and timbres. Faithful to its jazz heritage, L’abîme dives into deep, engaging improvisations by Hugo Blouin (upright bass), Jean-Philippe Godbout, who’s also a member of the groups Andy Jon and Gazoline (drums), Alex Dodier, a member of the groups Shpik and L’oumigmag (saxophones, flute) and Gabriel Genest (tenor saxophone, clarinets).

These dates (along with one that took place on December 7 in Montreal) mark the launch of the group’s album, which – because of the pandemic – could only take place virtually.

Check out the album below, and find out more about the quintet via our Five Questions With segment.

Hugo: We are L’abîme, a new five-piece band from Montréal. We play our own intense and creative instrumental music. It is rooted in jazz, with strong prog-rock and classical influences. We are an all-acoustic band, with woodwinds, upright bass, drums, and piano (or Rhodes when playing live). We like to set powerful, sometimes haunting moods, and to create unexpected music through improvisation.

Jonathan: L’abîme draws from many genres to create its unique sound. As a jazz pianist, I learned a lot from giants like McCoy Tyner, Monk and Brad Mehldau. As a composer, I am heavily influenced by the classical music of the 20th century such as Messiaen, Mussorgsky and Debussy. In the group, musicians from varied musical backgrounds also bring a more rock esthetic to our sound.

For this project, the writing is akin to a small chamber jazz ensemble. A lot of the focus is on colors and interaction between the woodwinds and the rhythm section. Segments of improvisation punctuate the more melody-driven sections.

Hugo: Our music is full of surprises, even for us, which makes it great to both perform and see/hear. We like to contrast with slower, deeper moments, and harsher, crazier or funnier stuff. We take risks with the improvised parts, and it pays with new, unexpected stuff happening. And that’s great.

We have 2 upcoming shows in Quebec to celebrate our debut album (L’abîme), released earlier this year when shows were not an option. They are on Dec. 16th at Le 507 in Trois-Rivières, and Dec. 17th at La petite boîte noire in Sherbrooke. We will have electro artist viñu-vinu opening with live sets.

Jonathan: This is a tough question, for me, this album is almost conceptual and every song leads to the other naturally but if I had to pick one I would tell people to listen to Le culte III. The energy and groove behind this particular take is amazing and it makes for a good entry point for the rest of the album.