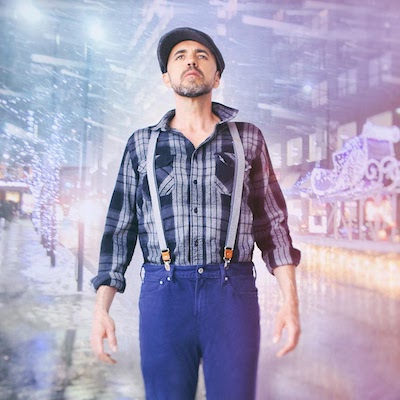 Award-winning singer-songwriter and multi-instrumentalist Hawksley Workman has released a catchy, festive jam titled “Indie Rock Christmas” accompanied by a nostalgia-filled video. You can stream the track here and watch the video below. Continuing in the holiday spirit, Workman has recorded a special Indie Rock Christmas radio show which will be airing on commercial radio later this month. The special features holiday songs from alternative radio luminaries including beloved Canadian artists.

Recently Workman announced a string of Western Canadian tour dates kicking off in Winnipeg on April 18, 2022. Before hitting the road next spring, Workman will be doing 2 special performances later this month commemorating the 20th anniversary of his beloved Christmas record, Almost a Full Moon backed by a full band which includes esteemed violinist Hugh Marsh. Workman will perform songs curated from the popular record interlaced with whimsical storytelling as well as other fan favourites spanning his incredible musical career. See below for details and ticket links.

Speaking of Almost a Full Moon, Workman is currently working on a stage musical with award-winning Canadian playwright, screenwriter and actress Charlotte Corbeil-Coleman set to premiere in late 2022. Commissioned by Edmonton’s theatrical powerhouse the Citadel, Almost a Full Moon is a play inspired by the beloved Christmas album and incorporates Workman’s songs in three storylines that chase in and out of different ages of Christmas, love, and family, winding together for a timeless story. A special staged reading concert event will be held December 10 and 11, 2021 in Edmonton. For more information, visit: Almost a Full Moon: In Concert.

Also announced is an exclusive run of vinyl to commemorate the 15th anniversary of Treeful of Starling. Originally released in 2006, Treeful of Starling is a quiet and poetic retreat to its predecessor, the energetic and hit-laden Lover/Fighter (2003). The vinyl will be available at retail-wide on December 17 but is available now to pre-order here and at Workman’s upcoming shows. Fans who purchase the commemorative vinyl from Workman’s webstore also receive 9 limited edition artwork cards (4 x 2.5″) by gifted artist Tim Domoslai.