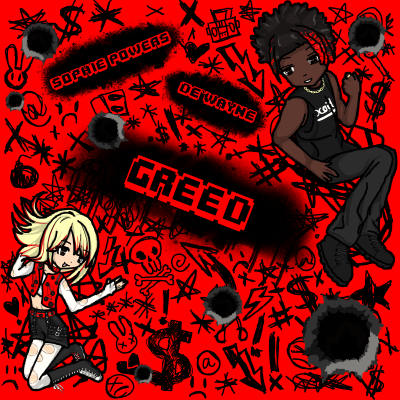 Sophie Powers is just 17 years old but she’s already carving out a name for herself in the industry. Her latest release is “Greed”, an amped-up single with singer, rapper, and poet DE’WAYNE.

The single is a hard-hitting track about the sins and damages of greedy people and packs a punch with powerful drums and electric guitars. Powers says the single was a therapeutic writing experience and the song has already surpassed over 60 thousand streams and climbing.

Her singles have reached over a million collective streams and found homes on popular playlists such as Punks Not Dead, It’s a Bop, Rock Favourites, and Punk Unleashed. Powers’s bold voice and point of view have earned her a place amongst Canada’s rising stars.

We caught up with the young rocker to talk about her new single and where her career will take her next.

At 17 years old, to have such a strong sense of self and musical direction is rare and wonderful to see. Have you always had that kind of conviction and understanding of who you are as an artist?

I’ve always understood what I want to represent as an artist and what I want my message to be: I want to make music that helps kids, people, in the same way that it helped me. But artistically it took me a while to find my sound. I couldn’t decide how to separate what I liked that other artists had made, versus what I wanted to make myself. But by taking musical elements from a plethora of artists, I created a formula for my own sound. I’m still discovering my sound every day and exploring what I’m capable of doing, but I’m much more confident with my abilities.

Were there any creative challenges you faced during the pandemic? Or was it more of an opportunity to sit with any feelings and channel them into your music?

While writing music during the pandemic, it was both a creatively challenging time and a great time to channel my feelings. I was feeling alone and was in a dark place (as I’m sure most of the world was at the time) but that depression and anxiety-fueled my lyricism. At the same time, I wanted to write about happy things, but it just felt inappropriate when so much bad was present in the world. I didn’t want all of my songs to seem sad. I wanted there to be more layers. So, I moved towards emotional triggers like being angry or annoyed, or frustrated. That really opened a whole new window of lyrics for me, which is clear with greed.

How did you and DE’WAYNE find each other and how did the single come together?

I knew of DE’WAYNE and when my manager asked me who I’d be interested in having on a feature for greed I thought he would be really cool. We met up the day he recorded his verse in the studio, then again for the music vid. He’s a great lyricist and is so talented. I’m so happy with how the song turned out.

You’ve mentioned this song was therapeutic to write. Can you explain how it helped you process your feelings? And how did you feel when it was recorded and released?

At the time of writing this song, I was veering away from sadness and more towards anger. I was angry I had been sad for so long. I was angry I let people’s greed drain me for so long. But most importantly, I was angry the world was/is filled with so much greed. I sing and create music with love. But writing from a place of anger and frustration was so new and refreshing. It felt like I was taking my own power back writing this song. “Greed” helped me move on from any past feelings of turmoil regarding feeling lesser than, or taken advantage of by greedy people. For those reasons, it felt as if a weight had been lifted off my shoulders once the song was released.

Since your singles are on other listeners’ playlists we want to know which artists are on yours? Whose music is in your current rotation?

I’ve been listening to a lot of new pop-punk releases recently including LOLO’s new EP and Avril’s new single “Bite me” of course. But hyper pop artist Miguel Angeles is also on a lot of my playlists right now.

Can fans expect an EP in 2022 or are you working on another single?

EP in February 2022!! I’m releasing 2 more singles before it drops though: 1 on December 17th and the 2nd in January.

Where do you envision your career in the next few years? Are there any milestones you’d love to reach?

Within the next year I plan on releasing my EP, touring in the UK in January opening for NOAHFINNCE HE’S SO COOL, recording another EP or album, and performing at the Air Canada Centre in Toronto. Ok maybe the last one is a lie, but it will be true in the future. A big goal I’d love to achieve in the next year is being able to perform in my hometown Toronto and having people outside of my friends and family attend it haha. That would be a huge milestone for me.