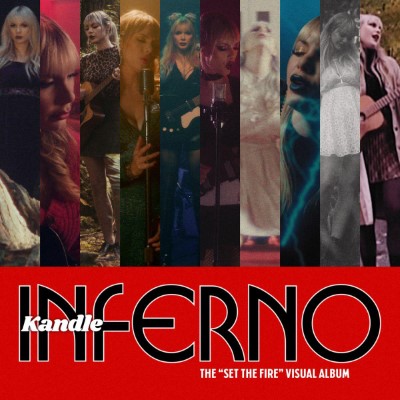 On May 28th, Kandle Osborne released her critically-acclaimed debut independent record, Set The Fire. With stark, striking honesty over a captivating array of sonic influences, the album is a journey through toxicity, manipulation, and heartbreak, and finding one way to empowerment and strength; begging the listener to follow along and get lost in the world of Set The Fire. On November 29th, Kandle brought that world to life with Inferno – a companion short film and visual album.

“Images have always been equally as powerful to me as music,” reflects Kandle. “Since I began my career a decade ago, I have had the dream of creating a visual album. Ironically, it finally happened at a time when I no longer had the support of a label, management and production team; just the right collaborator and a stubborn dream. Set The Fire is an album representing a journey – weaving in and out of states of hope and hopelessness, self-deprecation and empowerment, love and betrayal. I believe this is a journey most of us can relate to as we try and find our way through a complicated and messy existence with great highs of clarity and euphoria and rock bottom lows of trauma and grief.”

With a passion for visual storytelling (Kandle studied photography and has been working on a comic series), Inferno was a natural step in bringing the stories of Set The Fire to life – after earning a nomination for a 2021 Prism Prize for Set The Fire’s lead single, Lock and Load, (her second nomination for the award following Not Up To Me), as well as an earlier nod for a Canadian Independent Video Award in 2020.

Inferno stars Keenan Tracey and James Neate alongside some of Canada’s top musical talent, Louise Burns, Kendel Carson, and Debra-Jean Creelman. Directed by long-time collaborator, Brandon William Fletcher, the film features a stunning interwoven series of music videos – some audiences have seen before, some they have not – as well as a little new footage that landed on the cutting room floor, and some live videos for various version of the reimagined songs.

Along with the visual album, Kandle has teamed up with Plan International Canada – a member of a global organization dedicated to advancing children’s rights and equality for girls – for The Power Within project. In support of the project, Kandle has designed a special t-shirt, featuring an illustration from a drawing series that Kandle began last year, showing common experiences she and many women in the music industry face. The t-shirt will be available online and at her upcoming concerts (dates listed below), with 100% of the proceeds being donated to the organization.

“I am an artist that finds creativity cathartic,” says Kandle. “I am no stranger to mental illness and the endless work and strength it takes to try and achieve a state of calm, happiness and safety. I can think of no better way to present this film to the world than to use it as a platform to raise funds for others in need and to provide some hope and optimism in a world that can be frightening and restrictive. Now I know that when I can’t find my spark, I can always set the fire and inspire others to do the same.”