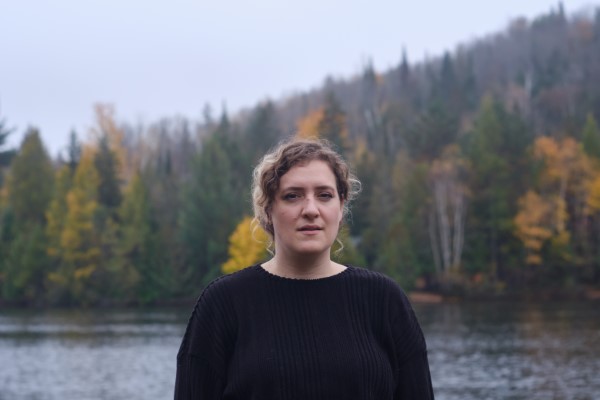 Montreal, QC-based artist, Halde (aka Sabrina Halde, who first made her mark as the lead singer of Groenland) is now pursuing her solo adventure, and has released her brand new single, “Little Pleasures”.

“”Little Pleasures” warlike pop sound reminds us with its military snare and engaging guitar riffs that the only battle we fight is one against ourselves. Everything starts from understanding the power of vulnerability and authenticity, but first, we need to throw down the weapons and understand our defense mechanisms.”  explains Halde about the song.

Co-directed by Halde and Victor Saliba, the video embodies duality through a mirror effect. The images capture the darker mood of the song and were shot at daybreak on a rainy day near the lake in Chertsey. This simple concept in its execution grasps a sincere fragility that pierces the screen.

“I wanted to show my face because it’s something I have struggled with in the past. We wanted to use the reflection on the water to show the troubled mind that suffocates behind the mask we wear every day. Victor had the idea to stack the two ideas to complete the image. The video demonstrates the start of great healing: the moment we realize that we need to change”,  tells Halde about the concept of the video.

Check out the video for “Little Pleasures” below, and find out more about Halde via her socials.

Yes. I write songs. I am also obsessed with learning about healing, tarot, and all kinds of witchy stuff. I live in a little cottage in Chertsey, Quebec, where I learn about gardening and care for my cats.

I guess I blended all the different styles I love, from pop to alternative music, soul, folk, and rock. The way I write is very intuitive. Most times I start with a melody or piano/guitar riff or a beat or sound that catches my interest. Then I let my excitement or my connection to it lead me, and I start building around that. Catchy melodies, whether for vocals or other instruments, are what drives me. As for the lyrics, they often talk about healing, nature, and the struggles I go through.

The pandemic was a real challenge for me for a few different reasons. One of them is that my mom’s Alzheimers was developing much faster, so I had to find a way to express my grief. I had the idea of starting a Patreon account to feel useful and to ask support from a community of people that care about me at the same time. That experience was life-changing. I realized how healing creation was for me. I was making music videos, but also videos about gardening, tarot, nature, anything that is of interest to me. It helped me feel better about myself and heal some creative blocks I had carried for a long time.

Well, there’s only one of my songs out at the moment, so I guess I’ll go for that one. It’s called “Little Pleasures“, and it evokes the different distractions on our path that sometimes keep us from taking accountability. For a long time, I chose to fight harder for what I wanted instead of surrendering to the fact that it wasn’t what I needed. The song was my way to throw down the weapons and look for other ways of finding happiness. It’s the opening single and the starting point of my healing after years of fast-paced life in the music industry with my old band “Groenland“.

I just went to “Seulement“’s album launch, Mathieu Arsenault’s new project. It was otherworldly. The way he bares his soul in every note and every sound he creates is amazing. It’s nothing like I’ve ever heard, but I still relate to it so much. Another band that is great live and whose albums are often playing at home is “Bon Enfant“. There’s a 70’s rock vibe, with solid, melodic hooks and great lyrics in french. The singer has a great presence on stage. The Shirley is also so much fun to see live! Three amazing women playing some pure, uplifting 90’s pop-rock. Go see them!