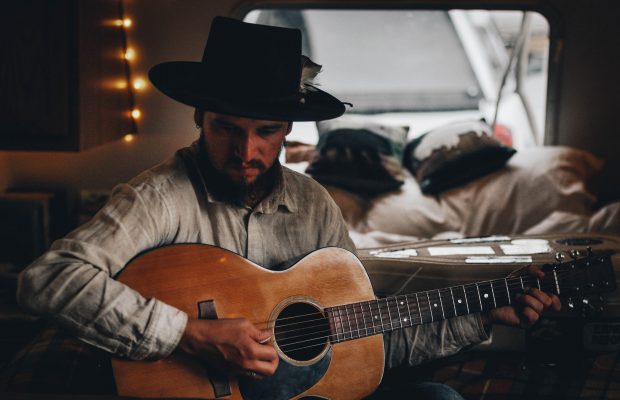 With the pandemic lagging on, Alberta musician, folk music scholar, and ethnomusicologist Mike Tod did what he’s always done to ease his mind of stress – plucked away at his guitar and sung traditional folk tunes. His self-titled three-track EP is a result of his seclusion. It includes a handful of traditional songs that showcase the enduring, remedial power of folk tunes in times of turmoil.

“When I think of the greatest folk artists of our time, I think of those who made music during times of tremendous struggle – Woody Guthrie during the Great Depression, Bob Dylan during the Vietnam War, and the list goes on,” Tod says. “We turn to folk music in really challenging times to make sense of the world and find comfort. And I’ve found myself turning to it throughout the pandemic.”

Tod has previously released music with the old-time acoustic duo Godfrey & Tod, and the Mike Tod EP marks his first release as a solo artist – it’s also a teaser for a full-length to come in 2022. The EP features reinterpretations of the blues standard “Motherless Children,” traditional Appalachian ballad “Shady Grove,” and beloved folk tune “Garden Song.”

​​Find out more via our Five Questions segment with Tod, and stream the new EP on Spotify.

My name is Mike Tod. I like to research, study, and play old-time folk songs. I like good stories, which is probably why I love old folk songs. I currently live in Canmore, Alberta.

Old-time music – some people call it traditional music – is like a big pot of genres from different parts of the world, from around the 1800s to early 1900s, which are stewed together. It incorporates African instruments, such as the banjo; Italian instruments, like the mandolin; Spanish instruments, such as the guitar; yodelling from the Swiss alps; ballads from Scotland, Ireland, and England; Indigenous rhythmic elements; waltzes from Germany; and much more. Most old-time/traditional songs don’t have a known author. They are songs that have been passed down from generation to generation, songs that have travelled across oceans and large landscapes, and have been refined over time by different groups of people. Playing and listening to old-time music fills me up like a good meal.

That’s a good question. At the start of the pandemic, my partner Opal and I bought a truck and trailer and hit the road from Alberta to B.C. We ended up living on a 12-acre sheep farm on Vancouver Island for most of the pandemic. We went through a full season on a sheep farm, called Ash Farm, in the Cowichan Valley, from lambing to shearing season. I worked the sheep on a regular basis with a border collie named Coal and trained for sheep dog trials, which are competitions to test how well a trainer can guide their dog through various obstacles. I entered some competitions in the fall and placed 2nd in the novice category in my first trial. Coal taught me a lot about the mental and social benefits of having purpose – border collies need a lot of stimulation to thrive, much like humans.

It was a great experience: lots of space outdoors, always lots of work or projects to do, and that time on the farm fed my creativity. Also, since I was only really playing music for Opal and me, it made me think of different ways to play music. Restriction can really feed creativity. It fuels the mind to think up new ways to play old songs.

Maybe “Shady Grove.” It’s an old song from the early 20th century that preeminent flatpicker Doc Watson helped to popularize. Anytime I listen to an old folk song, I tend to hear it like I’m watching a movie in my mind. The recording of this song is a little bit like what happens in my mind when I hear old-time songs, like experiencing a mini movie.