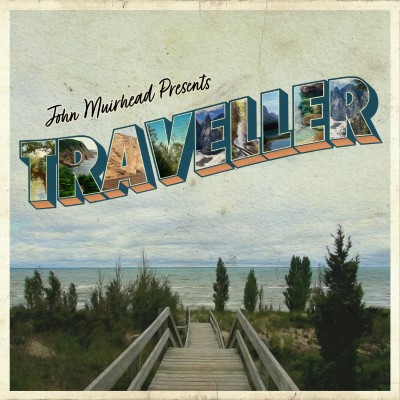 Before even listening to it, there are clues with which to gauge what John Muirhead’s Traveller is all about. First is album art that reminds me a lot of Cursive’s Happy Hollow, which makes sense; both designs were clearly intended to mimic the common style of city postcards, for reasons that signal the content of either album. In the case of Traveller, that content heavily revolves around experiences of being on the road. In fact, the album was largely written while the Toronto artist was touring through North America, with song titles to reflect this: “The Distance,” “I Can Sleep Anywhere,” “Tank of Gas,” etc.

Though with a definite rock edge, John Muirhead’s emphasis on story-like lyrics and acoustic guitar, accompanied at times by such additional instruments as harmonica or piano, root it more distinctly in the folk realm. For some of the songs, this translates into a calm and slow-paced, meditative vibe (hear “North Star” for a particularly stripped-down instance). On the other end of the spectrum, “Love Can Save Us” is one of the more truly rocking tracks on the release, while “More Behind” retains much of a folk orientation but is packed with some of the biggest energy of all—its jaunty rhythm, horns, and group vocals render it a blast.

Finally, and I’m reluctant to even draw a comparison because the resemblance is slight, but I was in certain moments made to think of Steven Page (e.g., the lush and somewhat throaty vocal tones during the title track). So kudos to you, John Muirhead, for harnessing some of that same voice magic as one of Canadian music’s icons. And further kudos for Traveller, its slick sounds, and all the tales and sentiments of geographic movement it describes. It really makes me wish that I were there.