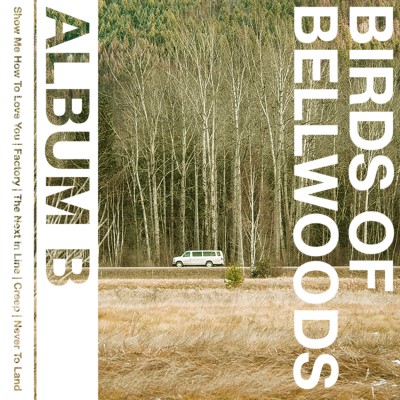 Barely clocking in past 12 minutes, Birds of Bellwoods’ Album B is brief but pleasant. With a more rock-centric release planned for the coming year, on this EP the Toronto band has taken an interim detour back into folk territory.

The instrumental side of things is relatively modest though effective, comprised of mainly acoustic guitar on the first few tracks, a raw piano foundation during “Creep,” and intermittent soft, reverberating rhythm throughout, all of which builds to the short albeit sweet a cappella finish that is “Never to Land.” Within such a generally unbusy framework, vocals like these have an opportunity to really glow, including many a great harmony (as particularly lovely on “The Next in Line”) along with wistful words, e.g., “Show Me How to Love You.” The song “Factory” is distinguished by being one of the more lyrically memorable while also the most musically populated and energetic.