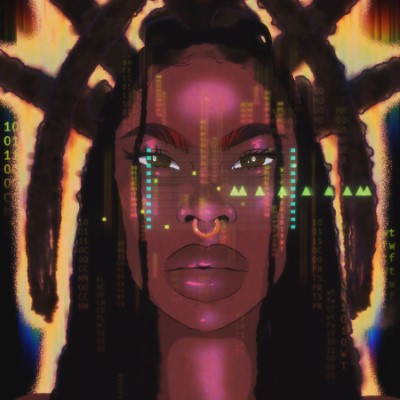 Stock Exchange is a mixtape that feels almost too dangerous to listen to. Using gritty low-fi beats, sirens, rapid drum beats, and intense subject matter, Haviah builds a soundscape that is full of palpable danger and paranoia. Haviah’s smooth flow cuts right through this treacherous ambiance like a hot knife through butter; using confidence and humor that is truly mighty. The result is a feeling that if the listener can just keep up with Haviah, they might just make it out of this album alive.

Stock Exchange is an intense release that doesn’t shy away from dark global topics like racism, slavery, and war. However, it also touches on very personal grim subjects like feelings of isolation due to a lack of people one can trust, or the fear of losing one’s integrity in the chase to be successful. As Haviah’s press says: “The title, Stock Exchange, refers to a reckoning Haviah had internally over the last year, connecting with how artists are forced to validate their value based on random data (followers, subscribers) and losing a part of the authentic human-to-human universal experience of art. “

It’s hard to pick favorites on Stock Exchange as every track feels integral to the whole – with lines and musical flourishes that seem to build on previous and upcoming tracks like a complex ecosystem. It’s an album that is best (and easy) to listen to back to back. However, if I had to pick some standouts, I’d recommend “Antisocial” and “Protest”.

Despite its somber subject matter, “Antisocial” is a great showcase of Haviah’s dark humor. Among lyrics about the fear, stress, and isolation that comes from having no one she can rely on that won’t (or hasn’t already) hurt her, Haviah defiantly announces on the hook that “I don’t need no friends, that shit is gross. You ain’t done nothing if you ain’t do it for yourself.” The tongue-in-cheek use of the word ‘gross’ is a great flourish that makes the listener feel confident that if anyone could really make it alone, it’s Haviah Mighty.

“Protest” is an intensely political track as Haviah and her guest vocals, Yizzy, lament that despite all the changes that came from the protest, from the civil rights movement to the Black Lives Matter movement, they both still feel highly unsafe as black people in North America. Haviah repeats the line that she has that “over the shoulder look back down” to relay the feeling of being actively chased and abused, but then Haviah wraps up the track by musing on the absurdity of racism by asking “Is it the melanin in my skin that I’m in that makes them want to turn me into a skeleton?” while still affirming her “skin isn’t something she’d swap out.” Instead, she ends the track with a near declaration of war to racists by saying “I’m getting to new heights, so you better know YOUR rights.”