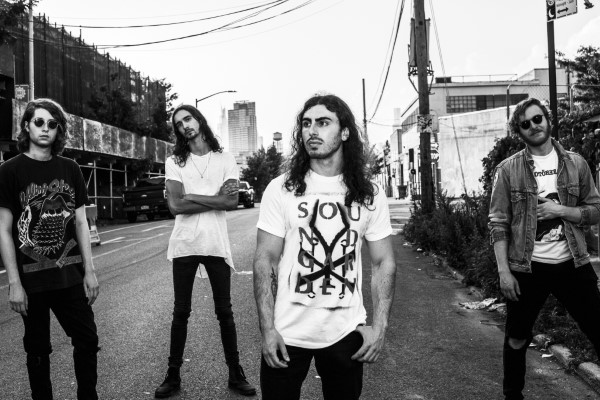 Toronto’s BRKN Love is heading out on tour in December and bringing their latest single “Dead Weight” to the stage.

Their rock sound has made waves across Canada with singles “Crush” and “Shot Down” reaching the Top 15 at Billboard Rock Radio in Canada and features on Spotify’s Rock Favourites playlist. Singer and guitarist Justin Benlolo absorbed inspirations from Soundgarden and Led Zeppelin in his youth and channeled their energies into his own sound.

Working with producer Joel Hamilton, BRKN Love released their debut self-titled album in 2020, amassing over 19 million streams, and has no plans to slow down. With tour dates in Toronto, Bellville, London, Montreal, and Ottawa, the band is ready to perform again for their fans.

We caught up with BRKN Love to talk about their creativity during COVID, new music, and their upcoming tour.

Did the pandemic affect your creativity in any way or force you to adjust the way you write and create music?

At first, it did. I felt completely uninspired and defeated. Our first LP had essentially been robbed of a legitimate chance at success, at nobody’s fault. It took a long period of being inactive and lazy to finally decide that I should take advantage of the time given to me. The lack of any real-world experience had definitely impacted the subject matter of the songs as well. I had to work hard to think of things to write about for sure.

The way fans embraced your debut album must feel pretty special, with millions of streams and making Spotify’s Rock Favourites playlist. Have you been able to soak in the reception to your music or are you always focused on what’s next?

It’s amazing that people care about that record. I was worried that without playing any shows, we would fall off pretty hard. All in all, it didn’t really hit me until we started playing again that people really paid attention to it. The online numbers don’t feel real to me. Seeing people sing the words at the show, or telling us something about a certain song face to face, has made me feel like we truly succeeded. It’s unreal that people give our music the time of day and I’m so thankful for it. I also generally get over the songs we record by the time we release it, mainly because of the time gap between recording and release. I’m usually ready for something new every time we put out a song because it’s not fresh for me anymore.

Tell us about writing and recording your latest single “Dead Weight.”

That song was actually sitting around for years. I had written it for my first album but it never made the cut. When we were digging around and talking about the prospect of a new release, I first took a look at all the old songs I had that were maybe worth working on. Turns out I had completely forgotten what the song sounded like, and it was a gem of a find. I ended up re-working the idea and pitching it to everyone. It ended up being well received by my team and we put it on the record. Recording was fairly simple. Nothing fancy. We did what we always do, set up, and just rip it a few times until we’re happy. We never try to overcomplicate anything in the studio. I truly believe that less is more.

How does it feel to be finally going back out on tour?

I finally feel like a contributing member of society! Seriously, I felt completely useless sitting at home all the time. It wasn’t like we could just work at home when that all started up. My job is to play rock and roll shows and that was naturally the last thing to return. It was a little bit of a shock at first, to be in a crowded room of people, but we got used to it pretty quickly and it felt just like it never left.

For anyone who hasn’t been to a BRKN LOVE live show, what kind of experience and atmosphere can fans expect?

It’s just a lot of fun. We don’t take ourselves seriously. I like to think of it as a big rock and roll party. We also play for real. No tracks, no fake guitar amps, no metronome, or anything like that. We keep it as organic as it could possibly be. It gives us the freedom to pretty much do whatever we want with the songs live and every show we play is different because of it. Basically, if you want to see a bunch of guys jump around a stage like crazy people and hear a little Canadian dude scream at the top of his lungs all night, then we’re the band for you!

Since we’re coming up to the end of the year, what does 2022 look like for BRKN LOVE?

We got a new record that we’re finishing up! I’m not sure when the whole thing will be released but there will absolutely be new songs out next year. We have big touring plans as well, we’re doing a run with Big Wreck and Monster Truck in Canada in March-April. They’ll be a lot more as well, nothing I can disclose at this time, but stay tuned because we’re cooking something up!