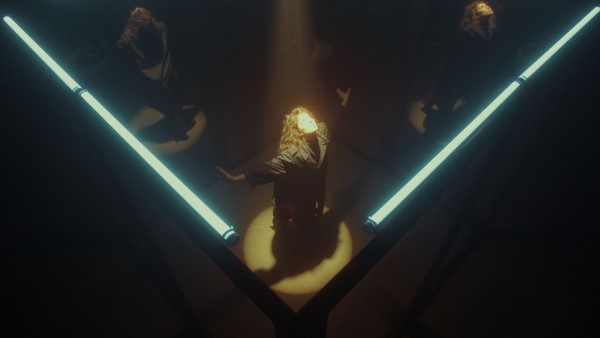 Recently, Jordan Klassen shared his first new single of 2021, “Milk And Honey”, a song about “feeling constrained, held up, waiting for something better to unfold,” he says. “And learning how to exist and even make the best of that space.” The new video for the track from director Joey Lopez embodies this idea. “The subject lives behind plexiglass (which we’ve all become familiar with) and dances there, expressing angst and fear and rambling hope. But still dancing.”

Of the video, Lopez says,

“for ‘Milk And Honey’ I wanted to deconstruct the original themes Jordan and I had come up with initially for the video. In my head, the video needed many moving parts, but at the core I found the most important thing – the thing I wanted to use to express the themes of the songs was movement. I wanted to avoid being direct with the scenes and instead wanted to focus on the body language of dancers. That’s when our choreographer and dancer in the video Anya Saugstad came in; we discussed what I wanted the video to be and after each meeting we had I began to simplify the message more and more, cutting away at what I felt were superfluous moments and instead began focusing on what I truly wanted from this video and that was pure emotional expression.

Instead of creating a straightforward narrative, we decided to go with a dance and a single set piece: the glass cube. I felt rather than interpreting the song directly I should instead use what I thought inspired the song – longing, nostalgia, loss, and the toll it takes on our mental health. The cube represents that moment in our minds that we constantly return to and find ourselves stuck in. Instead of fighting them or pushing them away, we choose to embrace them; to express directly how it makes us feel and to invite others inside to understand what this feeling really means to us.”

Over his career, Jordan Klassen has toured worldwide, becoming widely known for his well-crafted arrangements and nuanced songwriting. His sixth full-length record is due out in early 2022.