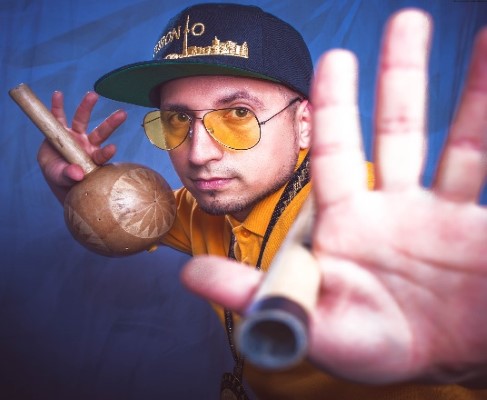 Incorporating Hip-hop elements such as beatboxing, emceeing/spoken-word, and turntablism with Afro-Indigenous Colombian música-de-gaita, champeta, and modern cumbia, Beny Esguerra and New Traditional Music have followed up on their JUNO-nominated A New Tradition Vol. 2: Return of the KUISi with Northside KUISi (Lulaworld Records). The new volume was released on Friday, October 15, 2021, to deliver an urgent call for justice, environmental healing, and respect for ancestors and land treaties.

Northside KUISi is a concept album narrated by news reporters from a distant future who speak an ancient, futuristic creole language made up of Lengua-Palenkera, Anishinaabemowin, Spanish, and English. It’s a carefully-woven song cycle of 12 songs with an extra seven hidden compositions that collectively chronicle the discoveries of an archeological dig, where traditional instruments from the Southern and Northern hemispheres are unearthed. The instruments found include a flute, a drum, and a vinyl disc containing encrypted information from a prophetic time of transition for the world circa 2020 AD.

The album reflects Esguerra’s experiences as a child who arrived with his political activist parents as refugees to Canada from Colombia. The compositions explore issues such as the mass exodus from South to North, environmental degradation, the celebration of instruments and traditions, global indignation to systemic racism and oppression, and the need for community collaboration and healing.

Inspired by the ancient prophecy of the Condor and the Eagle – which foretells the reunification of nations across the Northern and Southern hemispheres – Colombian-born, Mestizo, multi-instrumentalist and lyricist Beny Esguerra enlists artists from the North and South to collaborate on his works that also create bridges across diverse musical genres. Instruments included are the kuisi bunsi (Indigenous-Colombian flute), the hand drum (from Turtle Island), and the turntables (as used in Hip-hop culture in the Bronx, NY).

Check out the single, “Take Care” from the release below, and find out more about Beny via our Five Questions With segment.

I was born in Bacatá (Bogotá, Colombia) which is situated on traditional Muisca territory where my family and ancestors are from. I was raised by a family of arts educators involved in human rights work and activism who taught me the importance of the arts in the building of communities. Due to their human rights work during a time of political repression where activists were being persecuted and disappeared–similar to what is still happening today–we were forced to leave abruptly and seek refuge in Canada.

This impacted me a lot at a young age and made me grow up fast. I had to adapt to a new world and faced a lot of discrimination as many newcomers do. All of this made me understand complex issues at a young age. I quickly found stability in music, dance, and poetry and this allowed me to overcome many obstacles. It was traditional music and urban cultural expressions which rescued me. I am now a professional musician, spoken word artist, arts educator, and community worker.

As a musician and music producer, I have led multiple projects and received recognition by being nominated for a JUNO Award in 2018. As a spoken word artist, I have participated in festivals across North America, Latin America, and the Caribbean. As an arts educator, I have taught experiential courses that I’ve designed at York and Ryerson Universities and regularly facilitate projects in school boards across Ontario. In 2021 received the 2020 Ontario Arts Foundation’s Arts Educator Award.

As a community worker, I am the music director of several projects in Jane-Finch and currently lead the NTM Wheel It Studios mobile studio project, which engages artists in two Jane-Finch community neighbourhoods. This reduces the precariousness of youth having to travel from one neighbourhood to another and provides access to professional engineers, equipment and music industry-related knowledge. With this project, we’ve recently released the Wheel It Studios VOL 3 album, available on our website: https://www.wheelitstudios.com

For my community work, I was recently a nominee and finalist for the Toronto Arts Foundation’s Community Arts Award which celebrates an artist that has made a significant contribution in Toronto by working with, in, and for communities, while creating access and inclusion to arts and culture.

In addition, I recently released my third album entitled Northside KUISi, A New Tradition Vol 3 on Oct 15, 2021, on Lulaworld Records which can be found on all streaming platforms and on my website: https://www.newtraditionmusic.com

My music can be described as: Afro-Indigenous Colombian music from a conscious inner-city perspective.

Música de gaita comes from the 16th century and its instrumentation includes two Indigenous flutes from the Sierra Nevada de Santa Marta–the world’s tallest coastal mountain situated on the Caribbean coast of present-day Colombia–and drums that have their origins in West and Central Africa. This is the traditional music that I grew up with and continued to study during my graduate studies in Ethnomusicology. Parallel to that, I also grew up in an urban Tkaronto context inspired by and participating in Hip Hop’s elements and cultural expressions such as Breaking, Emceeing, Beatboxing, Deejaying and Graffiti. This influenced my approach of blending traditional South American and North American urban cultural forms.

The lyrics are in Spanglish with socially conscious content. Inspired by the Eagle and Condor prophecy, my recent release aims to create a bridge between the South and the North through collaborations with artists based in Abya Yala and Turtle Island.

Much of my work came to a complete stop in March 2020. However, with regards to the NTM Wheel It Studios mobile studio project, COVID-19 restrictions halted our progress but at the same time created an opportunity for us to quickly re-invent ourselves through apps, plug-ins, file sharing, and portable equipment.

We were committed to continuing the project due to its importance in responding to the needs of the youth in the Jane-Finch community–a west end community that has historically faced many racial and economic inequalities. It is an initiative that builds a culture of peace as its lessons on cross-cultural/cross-neighbourhood understanding and collaboration is needed and is starting to have long-term empowering impacts on our community. It was our sound engineering skills and a team of 25 talented artists/session musicians–who come with diverse musical heritages–that allowed us to complete Vol 2 in 2020 and Vol 3 in 2021 in a safe way while maintaining physical distance in one of the hardest-hit communities in Toronto during the pandemic.

Completing the Wheel It Studios Vol 2 and Vol 3 during the pandemic was the success story of the project.

I also stayed very busy writing to complete Northside KUISi as well as writing compositions for other projects I’m involved in as a freelance artist.

To Da Ones – fulfills the goal of the Northside KUISi album which is to create bridges between the South and the North through the Collaboration of artists, instruments and languages.

Inspired by the Condor and the Eagle prophecy, the song features Hip Hop artists from across the North and South of Turtle Island and Abya Yala representing territories within present-day Argentina, Chile, Colombia, El Salvador, Antigua, Jamaica, the US, and Canada. It is dedicated to our seeds, las semillas of A New Tradition; to our future generations many centuries away, the ones who we borrow the earth from every day.

Artists from my community: